Event: Preliminary results for the year to January 2016 published 15 March

Summary: An improved set of figures following last year’s awful interims. However, the numbers do suggest FCCN experienced a weaker Christmas while the cash pile really can’t afford another £9m outflow. Online sales were miserable, too. Still, Retail gross margins during H2 were the highest since 2011 and new board members may well help the moribund management. This value investment still requires inordinate patience… and I continue to hold. 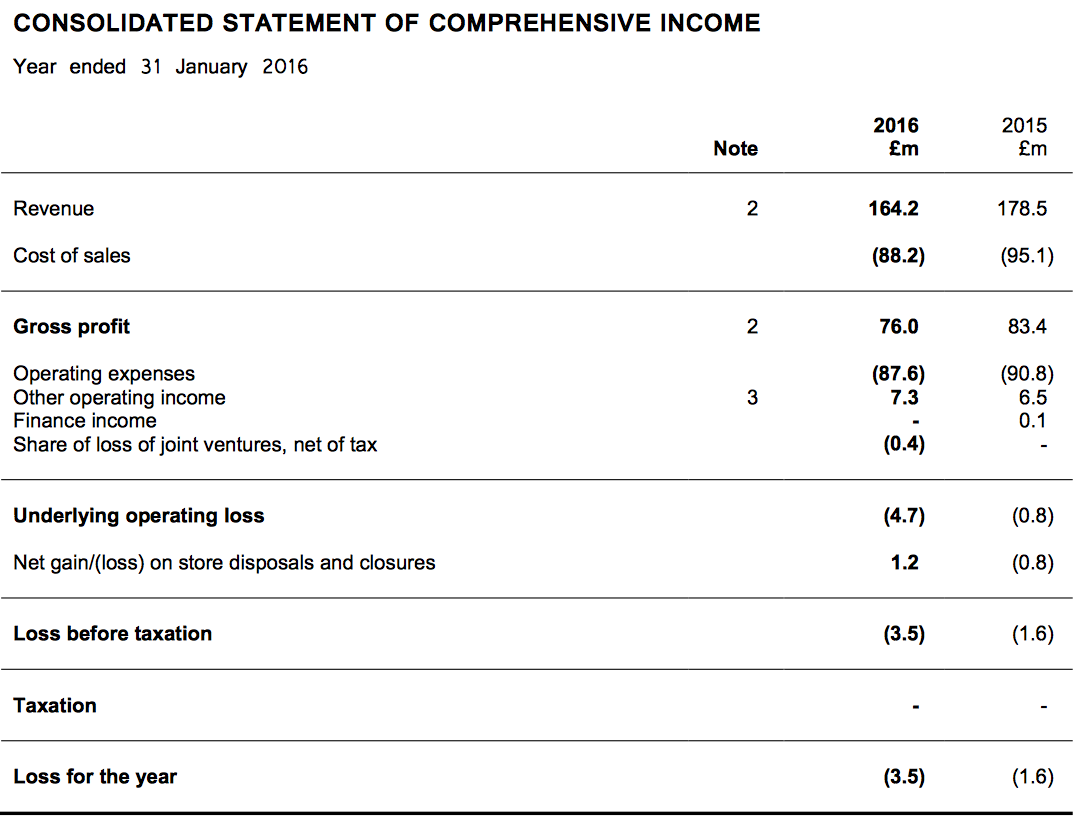 * Improved second half, but did the Retail division suffer a weak Christmas?

September’s basket-case set of interim figures meant that these full-year numbers were never going to be great.

In the event, FCCN reported its seventh pre-tax loss in the last eight years and the fourth consecutive absence of any annual dividend.

A trading statement in November had already hinted of improved trading and the second half did indeed score a slightly larger profit than the second half of the previous year (£3.2m vs £3.1m):

However, the H2 progress was due to greater licensing income and lower central costs. Sadly the troubled Retail division witnessed its H2 loss widen on last year (-£4.5m vs -£3.8m):

I also note that like-for-like (LFL) sales within the Retail division look to have slipped over the Christmas period.

Going on November’s update and today’s results, it seems as if the group’s cash pile advanced from £6.1m to £14.0m during December and January — up £7.9m.

Sure, there could be timing issues or one-off factors at play here. But the contrast does not look great.

Plus, with FCCN’s cash pile eroding by £9.2m during the year, a repeat performance for 2016/7 might now push the business into the red during the low season.

I trust the possibility of soon going overdrawn is galvanising management to ensure otherwise.

There was some good H2 news within the Retail division.

Though Retail revenue fell by £3.6m and gross profit dropped by £1.4m, the division’s H2 gross margin came in at 58.2%  — the first time FCCN’s high-street stores have scored a 58%-plus gross margin since the six months ending July 2011!

FCCN claimed the H2 gross-margin performance was due to “increased full-price trading, shorter discount periods and an increase in the input margin for the Winter season”.

Whatever the reason, higher gross margins do indicate a better product and I just hope this 58% level can be sustained to help stem the Retail division’s losses.

For some perspective, FCCN’s high-street gross margin was 64% during the firm’s mid-2000s heyday.

Another little glimmer of hope comes in the form of sales per square foot of selling space.

Including concessions as well as company-owned shops (but excluding franchisee-run outlets), I reckon H2 witnessed sales of £305 per square foot — up £10 on H2 of the previous year.

I was disappointed to see FCCN’s e-commerce sales down by 7% or so during H2:

I doubt the group’s online revenue is influenced that much by store closures, so I see these sales as a decent benchmark of the group’s underlying progress.

At least FCCN has implemented a new computer system to help revitalise its Internet efforts.

Some 13 shops were shut last year and a further 3 or 4 are set to go during the current year.  The presentation accompanying these results summarised the shrinking high-street estate:

A quick check on FCCN’s website shows 41 stores remain open in the UK, of which nine are located in London.

I suspect the vast majority of the group’s loss-making shops are within that 41, and possibly the majority of the losses stem from the nine (presumably high-rent) stores in London.

FCCN’s Regent Street store will shut this month and I hope its closure can save a material amount of money.

(I’ve always assumed FCCN’s outlets and concessions all pay rent (or equivalent) based on a percentage of turnover, and so they should not be losing money through onerous leases.)

Probably the most encouraging announcement of the day concerned two new boardroom appointments.

The news is welcome because FCCN’s top management really does need some fresh blood.

Indeed, founder/boss Stephen Marks and operations director Neil Williams — as well as FCCN’s two non-execs — have all been on watch throughout the group’s awful results during the last eight years.

Certainly FCCN’s new finance director might be a useful recruit. He has worked at online fashion giant ASOS:

“Lee Williams will take up the role of Group Finance Director with effect from 4 April 2016, filling the vacant position.  Lee is currently Director of Finance for ASOS Plc, the global online fashion destination, where he has been for the last 15 months.”

Furthermore, the new non-exec has a background in clothing rather than accounting/finance (although he was fired last year from Abercrombie & Fitch!):

“Christos Angelides has been appointed as an Independent Non-Executive Director of the Group with immediate effect. Christos brings significant expertise in fashion retailing, having spent the majority of his career at Next Plc in a number of senior management roles, with the last 14 years on the main board as Group Product Director.”

You never know, one day founder Stephen Marks may decide to step down and appoint a dynamic new chief exec (I wish he would). Mr Marks turns 70 in May.

My ‘value’ investment theory remains simple — if the £15m-plus losses at the Retail division can eventually disappear by closing a load of shops, the present valuation should look like a bargain.

For what it is worth, the immediate outlook is not a total disaster. Mr Marks claims: “The reaction to this year’s collections has been strong”.

I must admit, I have been impressed by FCCN’s recent light show — while the new Spring/Summer 2016 range has attracted some attention.

But as I have written before, FCCN shareholders have experienced no end of false dawns during the last decade — and there’s still no evidence to suggest the business has been turned around for good just yet.