Summary: As expected, this dull software microcap reported no miracles. Cost savings should underpin the firm’s near-term progress, but revenue growth remains as elusive as ever.  At least  EDP still enjoys plenty of recurring income and has committed again to a hefty 5p per share dividend. I’m trusting the trio of North American funds that hold 28% of this stock will one day stir-up some corporate action so we can all exit at an advantageous price. I continue to hold. 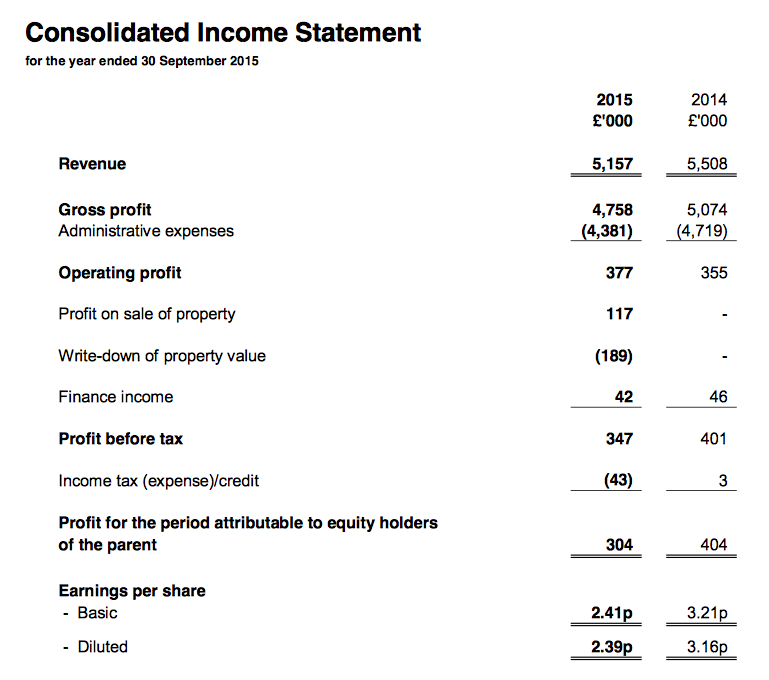 Following EDP’s underwhelming interim figures, I was not expecting miracles with these annual results.

The strong point of EDP’s business remains its recurring income. Annual software licences and hosting fees stayed high at 79% of revenue (or £4,074k), although such income decreased by 7% on 2014. The firm continues to claim its turnover is moving towards “stronger ongoing subscription revenues”.

* Further small cost savings to be made

EDP had previously flagged the prospect of annual cost savings of £200k, and these results suggested such savings had now been achieved.

Looking ahead, the group reckons the long-awaited sale of a surplus property in Milton Keynes ought to save another £35k annually. In addition, a recent office move ought to yield a further £25k a year.

That prospective £60k total saving is material when the reported operating profit in these results was £377k.

* Profit understated due to pension accounting?

I wonder if EDP’s reported profit is understated due to the nuances of pension-scheme accounting.

Here is today’s narrative on the pension scheme (my bold):

“In sharp contrast with the IAS19 valuation, the most recent triennial actuarial valuation of the scheme, which was performed at 31 July 2013, showed a small surplus on an ongoing funding basis.”

“Importantly, as a result of the scheme being fully funded on this basis, the Group is not currently required to make cash contributions into the scheme.”

“The defined benefit pension scheme comprises a grouped funding arrangement whose sole asset is a with-profits insurance policy backed by corporate bonds. The main difference between the IAS19 valuation and the ongoing funding valuation is that IAS19 requires the scheme asset to be valued at the insurance policy’s discontinuance surrender value at the period end. This valuation does not take into account the guaranteed annuity rates which have been secured by the policy and which are included in the ongoing scheme funding valuation.”

To cut a long bookkeeping story short, EDP’s pension is in reality fully funded. However, the accounting rules dictate the scheme has to show a £2,265k deficit due to the exclusion of the fund’s annuity investment.

Anyway, EDP has no need to make cash contributions to the scheme (and naturally does not make any), yet reported profit is lowered by the pension accounting.

The accounts show £77k — a significant sum — was charged against profit in relation to the scheme for 2015, although there was no associated cash cost: 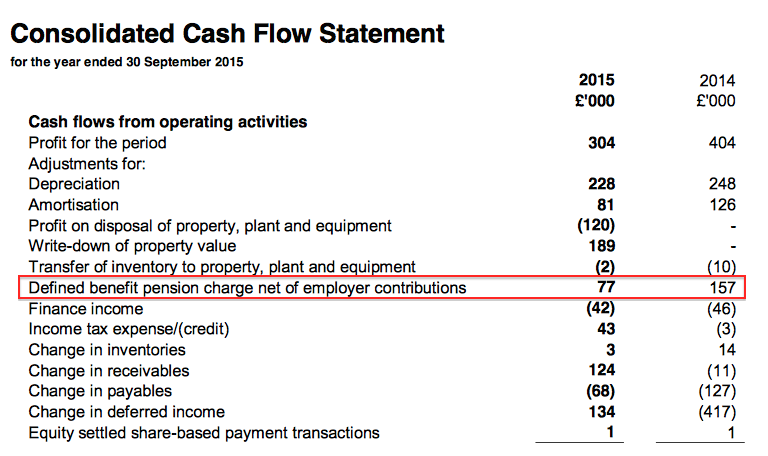 I’m pleased EDP has made some (slow) progress with its surplus properties.

For a start, today’s results showed a £425k sale and £117k profit following the disposal of a building in Sheffield.

Meanwhile, the aforementioned site in Milton Keynes looks likely to be sold for £1,181k — albeit £189k lower than its previous book value.

Cash flow during the year once again looked useful, with my calculation of surplus net cash coming in at £3,482k.

Throw in the Milton Keynes site as well and I arrive at surplus net cash and property of £4,663k or 37p per share.

* Slight upgrade to the outlook?

Given EDP’s declining revenue, I might be clutching at straws with the following.

But the group’s chief exec does sound a little more optimistic than this time last year.

“We have a strong product and services offering, a robust business model and considerable financial strength which will enable us to meet the challenges we will face in the forthcoming year. Having strengthened our sales team we expect to be well positioned to take advantage of those new business opportunities which do arise.”

Twelve months on, he now seems a fraction more confident of EDP enjoying “opportunities” (my bold):

“We have positioned the business to address the challenges we expect to face by strengthening our product R&D and sales teams over the last two years.  Our new product offerings have already been well received by customers and should provide us with good opportunities over the coming year.“

This may be another straw-clutch perhaps, but I also see EDP’s deferred income increased slightly on last year.

The gain was only £134k to £2,065k, but it was the first advance to deferred income since 2008. Deferred income broadly represents up-front customer payments, and uplifts here could signal uplifts to future revenue.

Given EDP’s awful long-term sales record, I will take any glimmer of a turnaround!

Sadly these results have prompted me to downgrade my future operating profit guess. I was previously looking at £592k, but in hindsight I may have over-egged the £200k-plus of savings the business had been anticipating.

Now I am going for today’s reported £377k operating profit plus the £76k restructure cost plus the £60k of future property savings. All that gives me a total of £513k.

Applying a standard 20% tax rate would in turn produce earnings of 3.25p per share — not enough to cover the promised 5p dividend.

Nevertheless, strip out the 37p per share of surplus cash and property from the 63p share price, and EDP’s enterprise value (EV) comes to 26p per share. The P/E on my EV and earnings calculations is therefore 26p/3.25p = 8.

I must add that EDP’s tax charge for 2015 was 12% due to R&D tax credits. As such, ongoing earnings could be higher and the underlying P/E might be closer to 7.

At the last count, the trio controlled 28% of EDP and I am convinced the end-game these funds have in mind is some sort of corporate deal.

The largest of the three funds bought in at 55p during 2013 and I’d like to think its managers expect further upside from today’s 63p.

8 thoughts on “Electronic Data Processing: I’m Collecting A 7.9% Yield And Trusting A Trio Of Investors Will (Eventually) Take Action”