Today I’m continuing my hunt for Watch List shares with a look at Dewhurst (DWHA).

Loyal management: Dewhurst has been a family-run business since its formation in 1919
Rising dividend: The payout has advanced every year since at least 1999
Interesting valuation: The shares could offer a possible P/E of less than 8

DWHA was established in 1919 and has since evolved into a specialist designer and manufacturer of buttons and keypads for lifts and cash machines. Recent years have seen the group develop other components for lifts, such as level displays and door ‘gongs’.

The growth rate over time has been consistently modest:

DWHA has suffered three setbacks during the last 15 years.

Profits i) fell 24% during 2001 following a costly factory refurbishment; ii) dived 13% during 2006 due to a “continual downward pressure on prices”, and; iii) slid 27% during 2013 after bumper keypad sales from the previous year weren’t repeated.

Nonetheless, the dividend has made dependable progress over time. It was lifted throughout the banking crash and the 2013 annual report claimed the payout had advanced by more than 5% in 31 of the last 32 years. Impressive stuff.

Results from the last few years have been blighted somewhat by goodwill write-offs totalling £5.6m.

During the last ten years, DWHA has spent almost £11m — about a quarter of its aggregate operating profit reported for the same time — on purchasing new subsidiaries, associate investments and assets of other businesses.

The latest balance sheet displays share capital of £1m versus earnings retained by the business of £20m. Furthermore, no new shares have been issued since 2001.

Counterbalancing the assets, however, is a £12.2m pension deficit. This liability is greater than DWHA’s annual profits and therefore means the firm fails one of my balance-sheet tests.

DWHA’s 2014 annual report confirms the company has been injecting a significant £1.4m a year into the scheme: 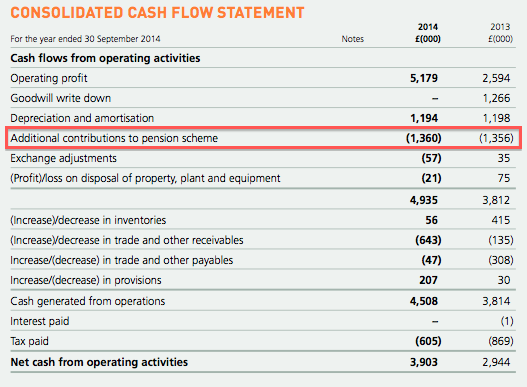 (Because of how current accounting standards work, these additional pension contributions are not charged to headline earnings.)

During the last five years, DWHA has pumped some £6.1m of such additional contributions into its pension scheme. And yet in the same time, the deficit has doubled from £6.1m to £12.2m.

The ballooning deficit has been due to the adverse changes made to the assumptions used to determine the scheme’s liabilities — not least a lower interest/discount rate, which increases the net present value of the scheme’s future obligations.

Such changes have added an enormous £12.2m to the deficit since the end of 2009.

Anyway, to put DWHA’s additional pension contributions into perspective, that £6.1m put into the scheme is equivalent to 71p per share and compares to the £3.4m paid out as dividends over the same five years.

Had DWHA not had a defined-benefit pension scheme, that 71p per share could have been dished out to shareholders as well.

As it is, the current £12.2m deficit suggests additional annual contributions of £1.4m could be needed for some time to come.

(Looking at the annual cash cost of the dividend and the pension scheme, I do not find it surprising the board is content with dividend cover being set at a high 4 times.)

Granted, the last five years have seen total cash capital expenditure exceed the aggregate depreciation and amortisation charged against reported profits. But the excess has been spent on property, which tends to be expansionary expenditure and should hold its value.

I am pleased aggregate working-capital movements have witnessed a relatively small outflow of cash.

Within the last ten years, operating margins have only once topped 13% and have averaged about 11-12%. Such middling levels of profitability do not suggest the business enjoys a special edge over rivals.

As such, I think it’s fair to say DWHA’s past progress has been due mostly to due some adept management.

I don’t believe so.

But for any ROE calculation, it’s worth looking out for prior-year write-offs. Such items reduce the equity base and can flatter the ROE result… but at some point shareholders’ money was actually spent buying these written-off assets and this expenditure ought not to be forgotten.

Calculating the ROE figures prior to 2014 are not easy given all the write-off adjustments needed to profits and the equity base.

However, a different ROE approach I can use here is to determine the incremental return on equity. This calculation tells me how much extra profit a business has earned for every £1 retained in the business.

Going back through previous five-year periods, I have to return to 2003-2008 to determine an incremental return on equity that’s greater than 13%.

It seems to me the returns on equity produced in more recent years have been diminished by those mixed acquisitions and the sizeable pension contributions.

Chairman Richard Dewhurst and group managing director David Dewhurst have served in their current roles since at least 1999 and can therefore claim responsibility for the subsequent run of dividend advances.

Both Dewhursts are in their 50s, so succession plans are not an obvious requirement at present.

Richard Dewhurst received a £126k basic salary and £85k bonus during 2014 — which does not look that excessive for a business making profits of £5m-plus. (I should add that DWHA’s directors appear to receive an annual bonus every year based on the level of reported profits).

Mr Dewhurst’s pay has risen at a modest 3% per annum on average since 2003.

Richard and David Dewhurst have a combined 13%/£6m stake while fellow members of the Dewhurst family enjoy at least a further 18%/£7m holding.

Other promising signs include a 5p special dividend declared in 2013 and buybacks representing 13% of the share count performed at about 180p a share during 2007/8.

I also like the fact the executives can work without needing an option scheme.

The 2014 annual results issued in December sounded mixed for 2015:

“Currently demand remains stable, but news on the economy is variable and volatile. From our perspective, Australia seems more buoyant than last year and there are some reasonable projects scheduled for the coming year. The signs in the UK and North America are also reasonably positive, whilst elsewhere the picture is less certain. However, the UK may struggle to maintain its positive momentum if the Eurozone returns to recession and there is also the political uncertainty of the coming general election.”

I suspect any further growth will be dependent mostly on DWHA’s operations located outside of the UK. You see, domestic revenues have been range-bound between £13m and £18m since 2002, and the £16m recorded for 2014 was only 3% higher than that seen ten years ago.

Of course, growing overseas can be somewhat harder than growing at home. I note a fair chunk of DWHA’s acquisition activity has been overseas and perhaps the greater difficulties of operating abroad led to some of those goodwill write-offs.

The difference between the two classes is that the DWHT shares carry voting rights while the DWHA shares do not. (Importantly, both types of share collect the same dividend.)

I’ve not taken DWHA’s cash position into account with my valuation sums, as I have offset that with the similarly sized pension shortfall.

The potential P/E on the 400p DWHA shares is therefore a lowly 7.7. However, the 9p dividend supports a token 1.6% income.

Is it worth watching Dewhurst?

There are very few quoted businesses around that offer an unbroken 15-plus-year run of dividend growth — let alone one where the management team responsible for such a record remains in charge.

Better still, the executives boast significant shareholdings and appear to act in the interests of all investors.

The shares do not look that expensive either.

For a start, there is nothing particularly appealing about this business. Margins are ordinary, ROE is ordinary and the past (and probably future) growth rate is ordinary.

Don’t get me wrong — I am all for owning dull and low-profile businesses.

But when I look through my existing portfolio, I see higher margins (e.g. FW Thorpe), higher ROEs (e.g. Andrews Sykes) and/or higher growth possibilities (e.g. Tristel). These are all features that tell me the businesses in question could be better than average, and hopefully more likely to deliver better-than-average gains as well.

I am also concerned about the size of DWHA’s pension deficit. I see this scheme as nothing other than something to go wrong and it may well absorb even more cash that could instead be distributed as dividends. Another worry is the board’s tendency for acquisitions — and the potential for more write-offs.

All told, DWHA offers appealing management that runs a not-so-appealing business. A P/E of less than 8 looks very tempting, yet I still harbour some reservations… and that tells me I would be better off passing on DWHA for now. A purchase today would be heavily biased towards ‘value’ rather than ‘quality’ and I’m keen to limit such investments — as they often go wrong for me.

Disclosure: Maynard does not own shares in Dewhurst.