Summary: A quite satisfactory set of full-year results, albeit the second half produced flat profits. WINK has become slightly more dependent on the booming London property market, but its estate-agency franchising operation continues to produce super margins and high returns on equity. There are not many shares with such finacials that I have found that presently trade on a P/E of about 10. I continue to hold. 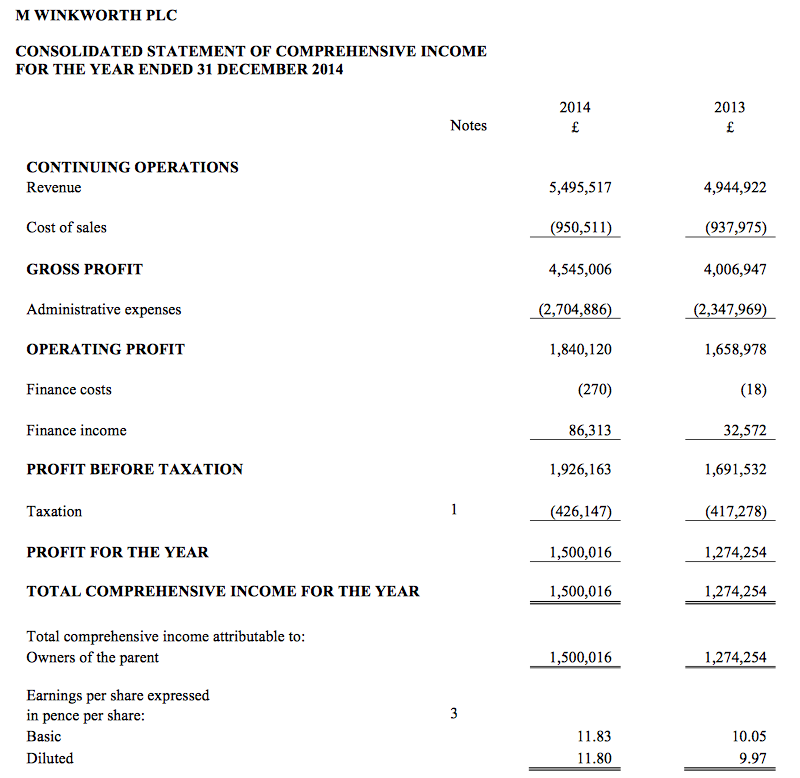 I felt these results were quite satisfactory. WINK reported ‘a year of two halves’, with the full-year 11% operating-profit improvement being achieved entirely during the first six months.

The firm claimed uncertainty about the outcome of the forthcoming general election — including mooted policies such as the ‘mansion tax’ — alongside the mortgage market review had stifled progress during the second half:

Despite WINK’s franchisees outside of London recording sales up 21% and its franchisees inside London reporting transaction activity down 15%, the overall business actually became even more dependent on the capital’s property market.

You see, transaction commissions in London gained 13% due to higher prices and caused the total proportion of WINK’s revenues that come from its London-based franchisees to advance from 80% to 81%.

Meanwhile, the proportion of group revenues derived from lettings remained at 35% and WINK revealed it is now aiming for “nearer 50%”. I’d welcome such an improvement, as regular lettings income ought to be more reliable than commissions from individual housing sales.

(That said, I do hope the “nearer 50%” weighting is achieved by the franchisees winning more lettings business rather than watching their sales commissions dry up!)

* But when will London’s booming property market really come off the boil?

I have long given up predicting the direction of house prices. However, WINK’s board is confident higher prices are on the way:

“Experience shows that it is traditional for the property market to be affected by uncertainty before elections, with activity returning to above normal seasonal levels after the event.

We expect this trend to be borne out in 2015, with the property market remaining below last year’s highly active level until polling day. Assuming a conclusive result, we believe that the market will enjoy a post-election bounce, restoring transactions to 2014 levels. We anticipate that prices will recoup the weakness of the opening months and show modest appreciation for the year as a whole.”

Operating as a pure estate-agent franchisor continues to produce high margins and high returns on equity:

WINK’s cut from its franchisees remains stable at about 11%, too:

I mentioned in my February WINK write-up that I felt WINK’s cash generation had been disappointing.

Something I had not really considered at the time of my share purchases in 2011 was that the business would lend significant sums to its franchisees. These cash handouts are accounted for in working-capital movements, which are compared to operating profits below:

True, these franchisee loans last for just three years on average and ought to help develop what are generally fledgling operations. But I had hoped WINK, as a pure franchising business, would be by now producing more free cash that it is.

The loans to franchisees are something I will continue to monitor.

The cash movements — including the 5.9p per share dividend paid during the year — left cash in the bank almost £150k lighter at £2.5m. The business remains free of debt.

* Then divide that 120p by my 11.6p earnings estimate and I arrive at a P/E of 10.4. That does not look bad value for a business that has just lifted its annual sales, profit and dividend by 10%-plus.

* I said in my February WINK write-up that “I suspect I won’t hesitate to drop WINK if I pinpoint a mouth-watering buying opportunity elsewhere!”

Well, I still hold WINK and have sold other shares to fund two recent buying opportunities. I have to confess, I have found very few shares that — similar to WINK — trade at about 10x profits and are blessed with super margins, net cash, a rising dividend and family management.