Today I’m continuing my hunt for Watch List shares with a look at Renishaw (RSW).

* Respectable track record: The accounts showcase a long-term record of growth, and are bolstered by high margins and net cash

* Interesting valuation: The shares have dropped 40% from their peak and sizeable exposure to China could lead to further short-term weakness

RSW was established in the 1970s when co-founder Sir David McMurtry developed a specialist measuring probe while working at Rolls-Royce.

RSW has since become a world-leading outfit in metrology and today designs and supplies a vast array of high-tech measuring, calibration and testing systems for use in a wide variety of manufacturing industries.

RSW floated back in 1984 and Companies House has annual reports stretching back to 1976 (the archives show that, during 1975, the group recorded an after-tax profit of just £3,745!). When the firm joined the stock market, revenue had topped £10m and earnings had surpassed £2m. 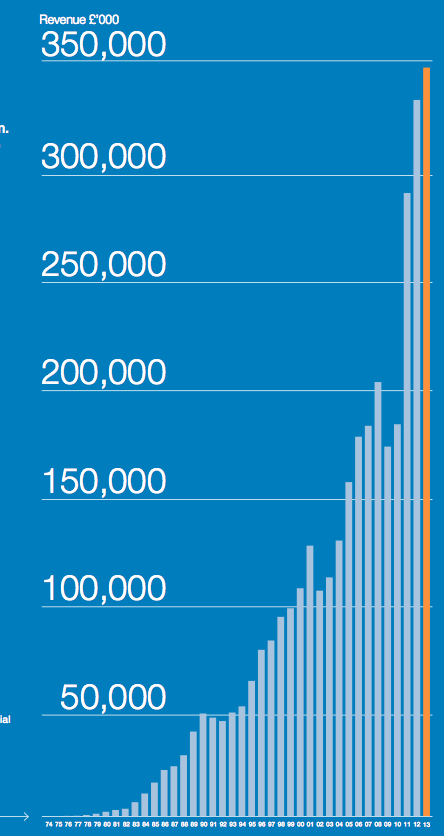 The growth rate over time has been very respectable, with the expansion seen during the last five years partly reflecting the group’s recovery from the financial crisis:

RSW’s long-term progress has not been entirely smooth. Earnings experienced notable setbacks during the early 90s and early 00s, and collapsed close to break-even during the 2008/9 banking crash. The table below shows how recent years have also seen some ups and downs:

You could argue the dividend has made dependable advances — even though the payout suffered a disastrous 2009. It was raised every year between 1984 and 2008, after which it was chopped by 70%. Thankfully the payout has since rebounded very strongly and is now almost twice as high as it was before the crash.

I’m encouraged how RSW’s results have not been blighted by recurring exceptional items. The largest one-off charge occurred during 2009, when the group spent £4m on redundancy payments. Other material exceptionals have related to a large gain on an investment and the closure of the the group’s final-salary pension scheme.

The last ten years have seen RSW spend about £30m on acquisitions and associate companies, which does not appear that extravagant when total operating profit during that time was £592m.

The resultant goodwill of £20m is small versus group net assets of £429m.

The latest balance sheet displays share capital of £15m versus earnings retained by the business of £402m. Furthermore, no new shares have been issued since 1999.

RSW has operated with a net cash position since the early 90s and last carried any form of debt in 1995. At the last count, cash was £82m. An appreciable bonus is freehold land and buildings that have an accounting value of £104m.

The downside to RSW’s books is the group’s defined-benefit pension scheme. This scheme has regularly run at a deficit and the last shortfall came to a sizeable £48m.

To help shore-up the scheme’s funding, RSW has had to put £15m into an escrow account and place fixed charges on certain freehold properties. I note the group currently contributes £2.5m a year to the scheme through ‘catch-up’ payments that are not charged to the income statement.

True, the last five years have seen total cash capital expenditure exceed — by some margin — the aggregate depreciation and amortisation charged against reported profits. But a large part of the excess has been spent on land and buildings, which tends to be expansionary expenditure and should retain its value.

On the working-capital front, changes in stock, debtor and creditor levels since 2011 have absorbed £91m — which is a considerable amount when the aggregate operating profit during the same time was £456m.

Mind you, my ratio calculations for stock turn and debtor days do not reveal any obvious adverse trends, while I note in particular that ‘past due’ invoices are not at an historically alarming level.

All told, I’ll just have to accept that RSW does not have the best of cash conversions —  with a lot of money spent on building new facilities and being tied up in stock and outstanding customer invoices.

During the last 15 years, the operating margin has averaged 20% and has dipped below 15% on only three occasions.

Such levels of profitability look very healthy to me, and RSW’s annual reports cite ongoing research and development spend as helping to keep the company at the forefront of its industry. I note that, since 2006, some £281m — a hefty 10% of cumulative revenue — has been expensed as R&D to develop new products.

I’m sure the group’s large collection of patents, plus its long heritage and sound reputation, have also gone towards creating a bit of a competitive ‘moat’.

I also see that revenue per staff member has advanced a substantial 71% to £130k during the last decade. That scale of improvement tells me growth at this business goes well beyond simply recruiting extra people to sell more devices.

The aforementioned Sir David McMurtry has run RSW since its formation and is therefore responsible for the group’s handsome track record. Sir David has been accompanied in the boardroom throughout by fellow executive and co-founder John Deer.

Both men are in their 70s, so succession planning really ought to be a topic for board discussion at present. Mind you, this super article in the Telegraph suggests Sir David is keen to carry on working.

Sir David received a £648k basic salary and a matching £648k bonus during 2015 — which does not seem that grandiose when the business doubled underlying operating profit to £144m.

I should add that Sir David’s basic pay has advanced by just 5% per annum on average during the last ten years — versus almost 9% a year for the dividend. Bear in mind, too, that Sir David and his fellow directors cut their salaries by 20% during the banking crash to help save on costs.

Sir David and Mr Deer enjoy a combined 53%/£617m stake, which has been largely unchanged since 1985 and has clearly given them both the owner’s eye.

The absence of any option scheme is another positive for me.

Maybe not in the short term.

“In the last financial year the Group benefitted from a number of significant large orders. It remains difficult to predict the extent to which there will be further such orders during the current year. However, the Board remains confident in the continued development of the Group and its long-term prospects. We now anticipate that revenue for this financial year will be in the range of £440m to £465m and profit before tax will remain in the range of £85m to £105m.”

That forecast mid-point equates to 2016 revenue dropping 9% and pre-tax profit slumping 34%. Not great, but the anticipated revenue and profit for the current year should still be way ahead of what was reported for 2014.

Adjusting for “large Far East revenues last year”, RSW claimed Q1 witnessed underlying sales gain 6%. Nevertheless, it is worth noting that China accounted for 24% of total revenue during 2015 and perhaps the present economic uncertainty over there may curtail RSW’s near-term progress.

Indeed, look back through RSW’s history and the company has been very sensitive to wider economic events such as the early 90s recession, the dotcom crash and the banking collapse. So I guess another economic setback could spell another profit downturn for RSW.

The shares do not appear super-expensive at present.

Taking RSW’s mid-point forecast of a £95m pre-tax profit, and applying tax at last year’s 16% (RSW benefits from R&D tax credits), I arrive at possible earnings of £80m or 110p per share.

The potential P/E on the my EV and EPS estimates is therefore 14. The trailing 46.5p per share dividend supports a 2.9% income.

Is it worth watching Renishaw?

There’s plenty to like about RSW — not least its illustrious track record of growth, the dedicated long-time executives and the attractive financials that appear to stem from a respectable competitive position.

All in all, I do get the impression this business has been managed with the long run firmly in mind.

Certainly I have just as good a feeling about RSW as I did with Goodwin last year — and at the right price RSW could make an attractive replacement for some of the ‘lower conviction’ shares I currently own.

Still, RSW is not a one-way bet. The banking crash showed that earnings here can be volatile and the disappearance of large sales to China may be the cause of another setback. Well, at least I hope so… as I then may be able to pick up the shares at a bargain price!

For now, though, RSW measures up well for my watch list and I await further developments with interest.

Disclosure: Maynard does not own shares in Renishaw.

2 thoughts on “Renishaw: Measuring Up Well For My Watch List”