Summary: Another set of bumper results from this residential-property trader. Once again gross margins held up very well while management’s outlook continues to be positive. My latest sums point to a possible NAV of £188 per share based on the firm’s previous mark-ups on sold units. I continue to hold. 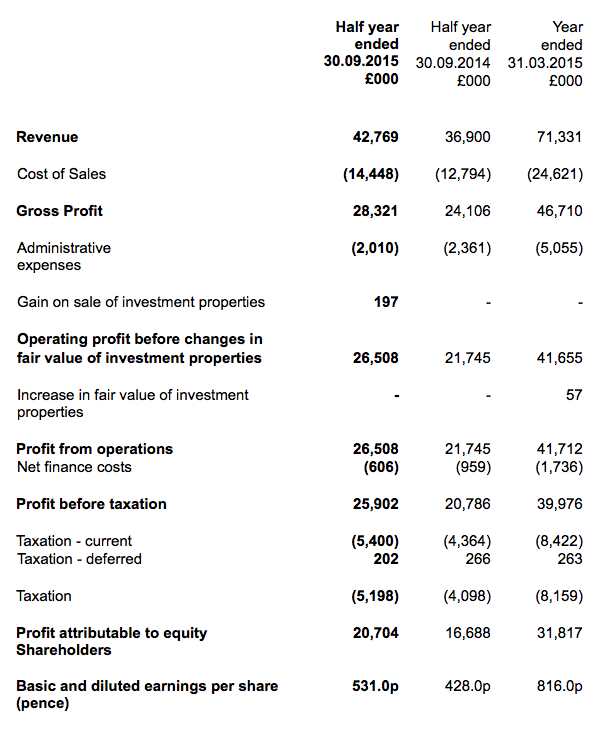 * Another handsome set of results

In addition, the first-half dividend was doubled to 200p per share, although MTVW made clear this increase was a temporary ‘front-loading’ of the annual payment due to forthcoming taxation changes.

This H1 performance also provided reassurance after the possible weak Q4 I referred to in June.  (The nature of MTVW’s regulated properties means they become available for sale at any time — typically when the tenant dies — and revenue from month to month can therefore be unpredictable.)

It was significant to see MTVW’s gross margin improve further to 66% — equal to the highest level achieved back in 2008. Clearly the firm is currently able to enjoy good sales prices on the historical cost of its properties.

MTVW remained positive about the future:

“Acquisitions made during the first six months equate almost to those made for the last full year and there are other purchases already in the pipeline.  The Company remains financially sound with gearing at a modest level and trading in line with the Board’s expectations.”

“The outlook for the Company is sound with financing in place to take advantage of any good purchasing opportunities which occur.  We can never control the macro-economic situation and presently Europe is experiencing troubled times, but we remain optimistic.”

At £50m, net debt has never been lower since 2007 and compares very favourably to total assets of £363m.

* Younger member of the family appointed to the board

“Duncan Sinclair has been with the Company for 43 years, during which he has occupied the positions of Company Secretary, Director, Executive Chairman and Chief Executive.  The Company has grown and developed significantly since Duncan became Chief Executive in 1990.  The search to find and establish Duncan’s successor is on-going and now intensifying. This is an important phase in the Company’s development.”

There has never been any subsequent word on finding Duncan Sinclair’s successor.

However, today’s results were accompanied by news that a younger member of the Sinclair family is to join the board. Dr Andrew Williams, a grandson of company co-founder Frank Sinclair, will replace Alistair Sinclair, a son of Frank Sinclair, as a non-exec.

Dr Williams owns 1.4% of the company and is a member of the family’s 53%-stake concert party. As such, I don’t think it likely the new director will disrupt the board too much (I know there are significant family shareholders outside of the concert party that might behave differently).

MTVW’s interim figures from last year revealed the group’s trading properties had a market value of £666m (with tenants in situ) versus a book value of £318m.

The group’s then chairman had suggested at the 2014 AGM that a revaluation would take place every year. However, comments at the last AGM have since scotched such plans on the basis of cost and benefits.

These results showed trading investments of £331m which, if sold at the the average margin enjoyed during the last ten years, would be worth about £860m.

Taxing the gain at 20% and then adding on other investments of £28m and subtracting net debt of £50m, I arrive at a possible NAV of £732m or £188 a share. That compares to £180 a share I estimated in June and the £77 per share NAV reported by MTVW today on a historical-cost basis.

With the share price at £113, clearly there is still some upside possibilities here. But as before, the big unknown remains how long it will take MTVW to sell its existing properties to realise my potential £188 per share NAV.

Assuming the dividend remains at 275p per share, the yield is 2.4%

4 thoughts on “Mountview Estates: I’ve Lifted My NAV Guess To £188 Per Share”