Summary: A better-than-expected set of results that was blessed with a reasonable outlook statement — a pleasant surprise given GTC serves the battered oil and gas industry. Progress was not perfect, though, with sizeable intangible expenditure and details of a substantial acquisition leaving me on ‘amber alert’. I am minded to await further results before considering any top-up. I continue to hold. 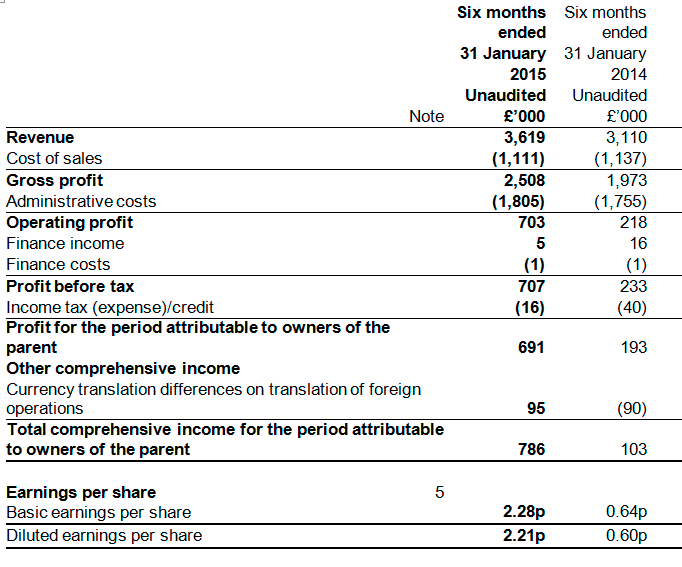 Here’s how I introduced my January GTC write-up:

Getech (GTC) supplies geophysical reports and data to oil and gas explorers — and I believe the recent oil-price slump is likely to have a significant impact on this small-cap’s near-term progress.

Indeed, even before the oil price started to plunge in the Autumn, GTC had already issued two profit warnings — so the immediate omens here are not great.”

I wasn’t optimistic ahead of these results, so I was quite pleased when I saw the headline figures. Revenues advanced 16%, operating profits more than tripled, the dividend was lifted 5% and an extra £1m was added to the net cash position.

I was also happy that these H1 figures generally matched the preceding H2 2014 achievement.

Although these H1 numbers were not perfect (see below), I reckon GTC performed well in what the firm described as “difficult market conditions”.

* Surprise — there was no profit warning!

I would not have been surprised if GTC had slipped in a full-year profit warning  within these results. Instead, the chairman’s outlook contained some promising comments (my bold):

“We start the second half of our year with strong cash balances and a substantial pipeline of sales opportunities.

However, the chairman did add:

“We remain confident about our medium and longer-term prospects.”

That can often be directorspeak for “we are not that confident about our short-term prospects.”

The chairman also referred to the oil-price plunge and suggested the company could cope with the sector’s cutbacks (my bold):

“The very significant drop in oil price since mid-2014 has led to cuts in capital expenditure across the full range of exploration and production (E&P) companies and across the E&P business lifecycle.

This has had a direct negative impact on the service companies, in particular those focused on exploration.

Our previous experience of working through oil price cycles has led to a number of conclusions.

First, the market can be difficult for a period of time. During this time it is important to focus on the key needs of clients and companies that are less affected by spending cuts.

Second, short-term reductions in expenditure, and hence, activity, led to reduced reserves additions, and hence, a longer-term increase in activity. This observation gives us support for the longer-term prospects for the business.

Third, downturns lead to opportunities for robust companies, such as Getech, to recruit good staff and consider acquisition opportunities. The Company remains in a very strong financial position.”

* Not much was said about the flagship Globe product

Meanwhile, the flagship Globe product — which supplies comprehensive data to clients through a three-year subscription — did not appear to attract any further customers.

“We are continuing to build the Globe framework with the aim of making it the pre-eminent exploration tool for oil and gas explorers.

As well as increasing the resolution of Globe, we are providing additional functionality to make it more accessible to a wider group of users and more flexible in terms of the sub-global and bespoke products that it can deliver.”

During the first half of 2014 Globe had ten clients, which reduced to five when the second three-year subscription period began in July. I’m hopeful Globe’s new “additional functionality” can soon attract some more clients.

For a start, both companies have successfully claimed R&D tax credits from HMRC — but I see only GTC has so far received a tax cash refund (a welcome £713k in these H1 results).

Furthermore, both companies did have their working-capital issues during 2013/14 — but I see only GTC has reported a favourable working-capital movement of late (a sizeable £879k cash inflow in these H1 results).

Plus… both companies have traditionally spent little on intangibles — but sadly GTC has joined PEN by suddenly deciding to capitalise a significant amount of development costs onto its balance sheet.

Yes — the main drawback to these H1 numbers was that development costs of £482k side-stepped the income statement. Alongside the £196k spent on tangible assets, it meant a hefty £678k was spent on capex — which was way ahead of the £152k depreciation and amortisation charged to profits.

GTC’s sudden and sizeable intangible expenditure is not great and no mention of it was made within the chairman’s statement. But unlike the situation with PEN, I am prepared to give GTC the benefit of the doubt here because:

i) Everything else in the latest H1 accounts appears to be in order, and;

ii) Past annual accounts have looked conservative — in particular, the previous five years have each witnessed cash capital expenditure completely covered by the depreciation and amortisation charged to headline earnings.

Nonetheless, I will keep tabs on GTC’s development costs and be on guard for any cavalier bookkeeping.

Accompanying the H1 results was news of an acquisition. GTC is purchasing an oil and gas consultancy called ERCL for an expected £4.3m.

I’m on ‘amber alert’ with this deal because the expected £4.3m cost exceeds GTC annual profits. It’s a simple rule of thumb that I use to limit my exposure to boardrooms that may harbour grandiose expansion plans.

You see, substantial acquisitions have signalled the downfall of many shares, not least because the deal-makers involved…

i) overpay for future profits and/or cost savings;
ii) suffer protracted integration problems that distract management, and/or;
iii) have realised their core business has run out of steam.

At least ERCL does not look to be an obvious disaster right now. It’s a similar sort of geoscience data business to GTC and apparently offers GTC exposure to areas of greater analysis expenditure (my bold):

“Getech’s market position has historically been focussed on global and regional scale work, which are relatively early in the exploration workflows. However, Getech has been extending its work towards basin and block scale evaluation, where there is greater expenditure and more focus on drilling risk reduction.  ERCL’s skills, experience and reputation are primarily in the use and application of seismic and well data in all stages of the workflow and hence strongly complement Getech’s current capabilities and market position.”

The £4.3m price does not look ridiculous either, at least when compared to ERCL’s latest profits:

“In its first year of trading as ERCL, it delivered (unaudited) income of £3.8m and profit before tax in excess of £1.2m. This was supported by exceptional contributions from work in Africa.”

How ‘exceptional’ the contributions from Africa were, though, was not disclosed.

To help fund the deal, GTC has used its freehold HQ to secure a £1.1m loan — and interest at 2.04% plus base rate looks quite affordable to me.

* Trailing operating profits now stand at £1,454k. Less interest of £28k on the new loan and tax at 8% (my best guess for GTC’s tax rate following all the R&D credits), earnings for the core business could be £1,312k.

* If ERCL brings operating profits of just £400k and is taxed at 20%, the new subsidiary would produce earnings of £320k.

* Net cash stands at £4,733k, of which £3,852k looks ‘surplus to requirements’ to me given GTC receives upfront payments from clients for its services.

* Those ratings do not look expensive if you believe:

i) GTC’s revenues can continue to hold up during the oil sector downturn;
ii) There’s nothing untoward in GTC’s intangible expenditure, and;
iii) The ERCL deal works out well.

* I still like Getech for its proprietary data products, asset-rich balance sheet and  ‘thin cat’ management team. But all the same, I am minded to await until at least the next results to re-consider my ‘amber alert’.

One thought on “Getech: I’ve Had To Raise An ‘Amber Alert’”