Summary: Good set of reliable figures with revenues, profits, the dividend and net cash all moving higher. Progress was made throughout the group’s different divisions, with sales of LED products apparently booming. A loss-making subsidiary has also been sold. I could find no accounting worries and wish all my investments could issue such dependable results. I continue to hold. 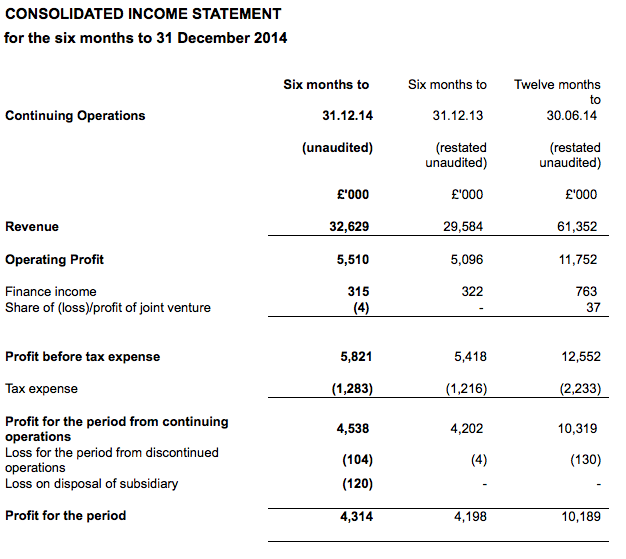 I was satisfied with these figures. Revenues advanced 10%, operating profits gained 8% while the dividend was lifted 5% — and will be paid just two weeks after the results were issued.

There were two promising parts to the chairman’s statement.

First, the disposal of a problematic subsidiary:

“Forward momentum has, however, continued to prove difficult at one subsidiary, its products being “retro” in nature and at odds with the company’s forward-looking philosophy.  I must, therefore, report that Sugg Lighting was sold for a nominal consideration on 6 February 2015 and is no longer part of your group.  Sugg Lighting has been purchased by a company specialising in traditional English heritage brands.”

Sugg was purchased during 1999 and has never really prospered since. The division reported losses of £230k during calendar 2014 and I am pleased the board has finally decided to sell.

Second, sales of LED products appear to be booming:

“LED products now represent around 58% of group revenues but Thorlux Lighting, in particular, still suffers from the parallel demand for substantial quantities of “old technology” products.  Measured and careful steps are being taken to withdraw these older products where possible without disruption to customer sentiment or causing stock obsolescence.”

The segmental analysis below confirms TFW remains dependent on its main Thorlux division: 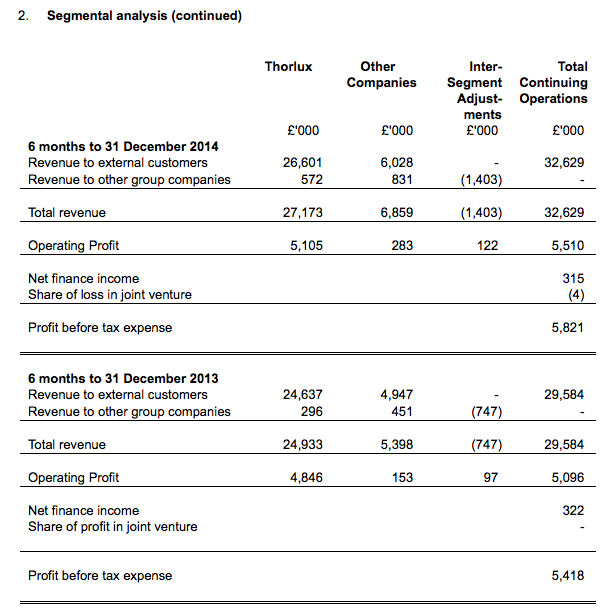 I am pleased Thorlux experienced good progress, with its external revenues rising 8% and profits increasing 5%.

I also welcomed the performance of TFW’s ‘Other Companies’ — the aggregation of the group’s six other divisions — which managed to lift external revenues by 22% and profits by 85%.

Margins at the main Thorlux division were a healthy 19%, while the balance sheet carries a substantial £41m/35p per share of net cash and investments.

Cash flow appeared reasonable as well, with the chairman explaining that a new factory costing £1.4m was why capital expenditure was a significant £2m.

I also see extra payments to the pension scheme reduced to just £77k during the half. Between 2010 and 2013, such payments were running at c£800k a year.

* Then divide that 115p by my 8.4p earnings estimate and I arrive at a P/E of 13.6. That multiple looks fair to me given Thorpe’s steady progress of late.

* I said in my January TFW write-up that “I think I would add more [TFW shares to my portfolio] if the P/E multiple fell back into single digits” and that remains the case.