SeaEnergy (LON: SEA) is an unusual holding in my portfolio for two reasons.

First, I found the idea from a bulletin board rather than through my own market trawls. Second, the business does not offer the time-tested management that I prefer to see running my investments.

So there could be danger ahead here!

In the mix also are a couple of start-up divisions that I’m hopeful can soon reach breakeven, as well as a stake in a quoted oil small-cap that might one day deliver useful upside. Indeed, my valuation sums indicate the group’s software ‘gem’ could be valued at just 7.5 times profits.

My first SeaEnergy purchase occurred during November 2013 at 31.5p and my latest occurred during February 2014 at 28.3p. My average buy price including all costs is 31.0p.

At 35p, the share price is currently above my average entry price, and I am hopeful recent contract news as well as other developments can lead to further gains as the market-cap ‘sum’ begins to reflect the potential value of the group’s ‘parts’.

I attended a presentation by SeaEnergy on 10 December 2013, during which I gleaned a few snippets of interesting information that I have repeated in this Blog post.

SeaEnergy was essentially established during 2008 when the management of Ramco Energy decided its future lay with offshore renewable energy (and wind turbines in particular) rather than exploring for oil and gas.

During 2012, fresh executives took on the revised strategy and the group today offers a mix of operations that all have offshore energy connections.

The largest subsidiary is R2S, a software operation acquired two years ago for a total of £10m, and which provides 360-degree spherical photography and associated user software.

The picture below gives a flavour of the R2S product, while this video shows the product in action — think of a souped-up Google StreetView for oil rigs.

R2S clients include BP, Chevron, ConocoPhilips and Total — all of whom I understand use R2S to reduce the amount of time spent by maintenance staff visiting their rigs.

It is, after all, much easier to organise and visualise the work to be done on a rig through a computer in an office, than on the rig itself. Indeed, oil rigs have limited ‘bed space’ and the fewer maintenance personnel on the rigs, the more room there is for production staff to actually operate the rig and produce the oil.

This slide, outlining all the benefits to the R2S system, was included in SeaEnergy’s presentation that accompanied the 2013 annual results. 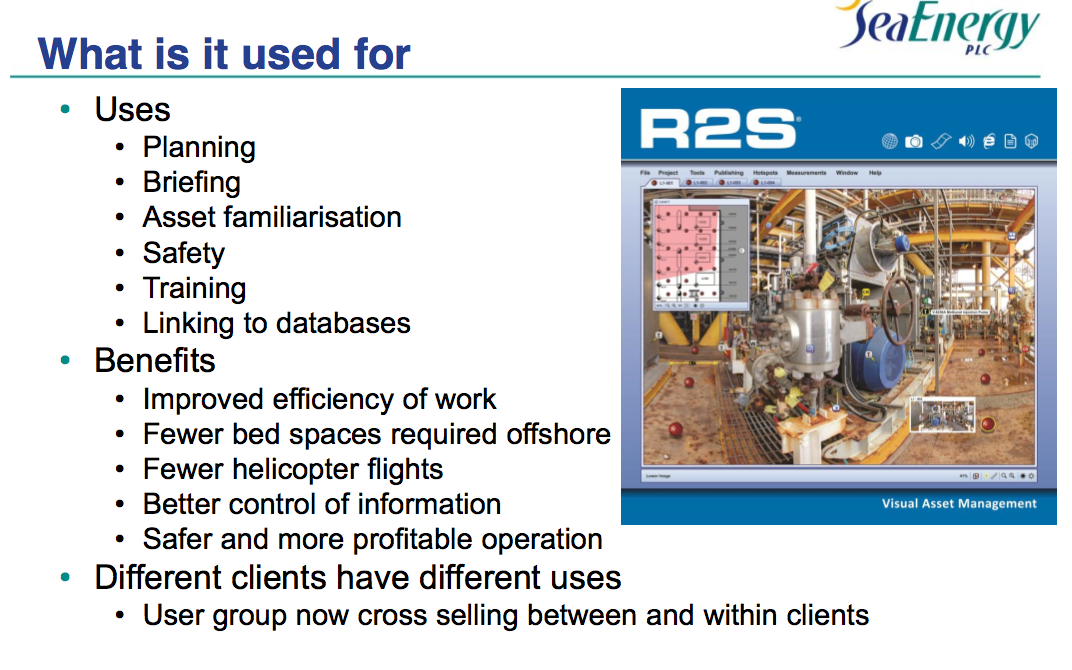 During the SeaEnergy presentation to investors in December, management claimed Chevron had reduced journeys to its rigs by 30% by using R2S to plan maintenance work more efficiently.

SeaEnergy’s other divisions are ‘Consulting’ and ‘Marine’.

Marine involves ship management, whereby SeaEnergy maintains and crews vessels such as the one below: 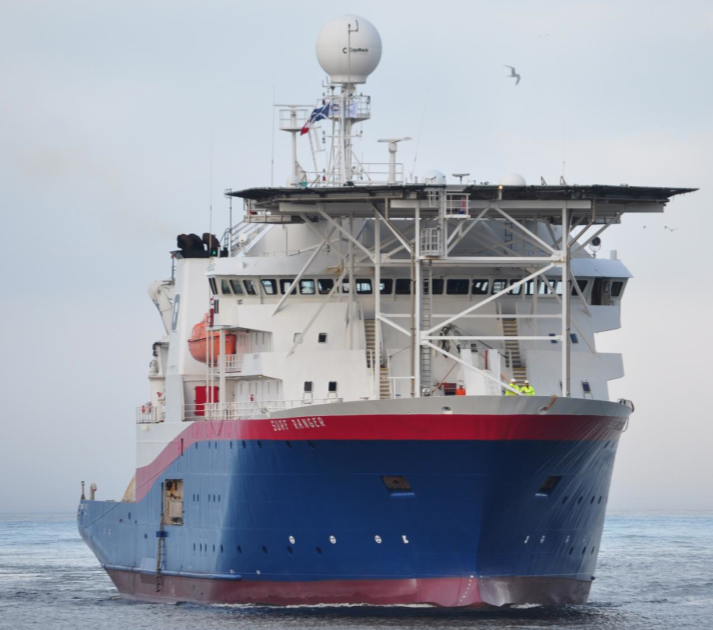 Marine also involves ship design, with SeaEnergy having designed a transfer vessel that allows staff to walk safely from the ship to an offshore wind turbine via a short bridge. Here’s a dramatic artist’s impression of what the vessel should look like. 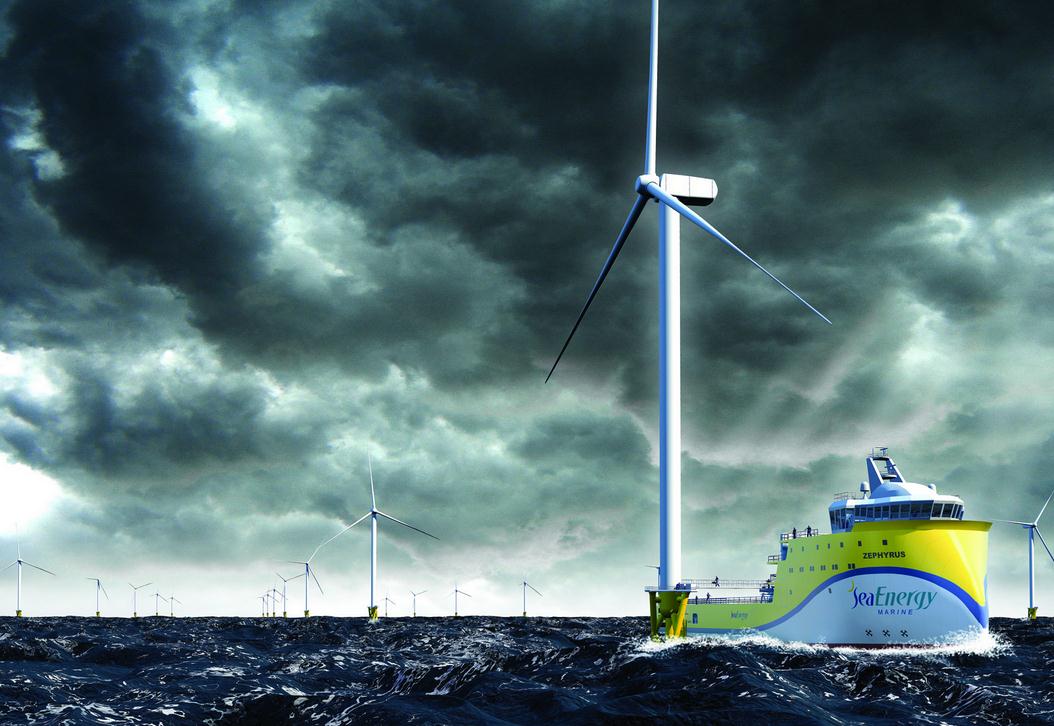 During the December presentation, management claimed its transfer vessels could cope with four-metre waves — apparently, ships currently used to service offshore wind turbines are generally limited to one-metre waves. Management also claimed between 50 and 100 of such transfer vessels would be required in the North Sea during the next ten years.

At present, SeaEnergy is seeking a client to order the transfer vessels and a partner to build them. Management has said each transfer vessel will cost around $50m to construct and SeaEnergy would have only a very small equity stake in each ship. The bulk of the revenues would instead come from providing services for and on each vessel.

Alongside all the service divisions sit a trio of legacy oil and gas investments.

The main investment is a 21% stake in Lansdowne Oil & Gas (LON: LOGP), a quoted small-cap whose main asset is a 20% stake in the Barryroe oil field.

Barryroe lies about 40 miles off the southern coast of Ireland and is said to contain 346 million barrels of oil. 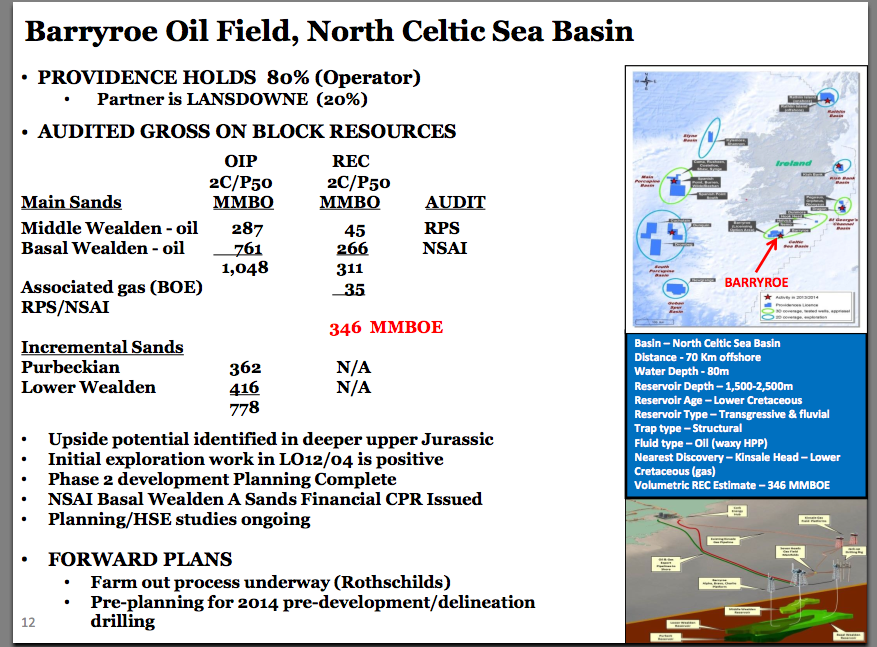 According to the latest results from Lansdowne, the firm’s stake in Barryroe is estimated to be worth $675m(!) — assuming one day the oil is actually extracted and sold.

SeaEnergy’s other oil and gas investments seem more like liabilities at present.

There is a 40% stake in a joint venture operating in Iraq, which has got itself into legal difficulties, and SeaEnergy could essentially be on the hook to pay about £500,000 if protracted court proceedings one day come to a final verdict.

Plus there is a further £500,000 to pay to the former owners of some North Sea royalty interests as and when “cash flow from the royalty portfolio commences”. That said, the projects remain in the development stage and any payment here looks a very long way off.

This is not the financial track record I usually go for

As you might expect with the strategic change, the purchase of R2S, the start-up divisions and the legacy assets, SeaEnergy’s financial track record is somewhat haphazard:

Details on R2S are admittedly thin on the ground. But I can show you an extract of the subsidiary’s 2012 accounts from Companies House, which show annualised sales of around £2m and profits below £1m: 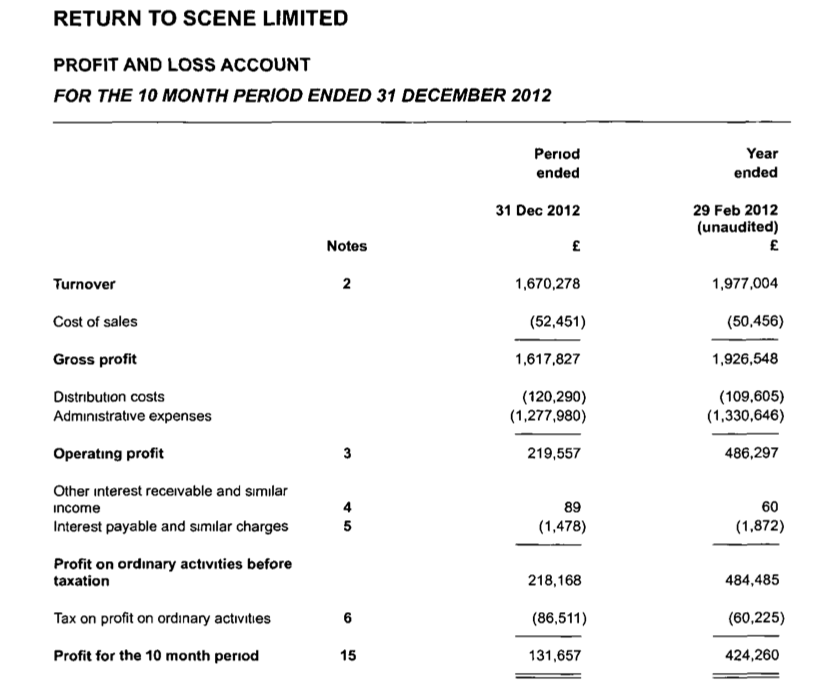 So clearly there was impressive progress at R2S during 2013. (I await the 2013 accounts of R2S at Companies House for the exact details).

Also impressive is the subsidiary’s immense profitability. I reckon operating margins topped 50% during 2013/14!

Cash flow at R2S appears satisfactory, too. Though there was no formal cash flow statement in the 2012 R2S accounts from Companies House, total cash capital expenditure (intangible and tangible) reported for the whole group for 2013 (£267,000) was just a fraction above the combined depreciation and amortisation charge struck against reported earnings (£251,000).

Both figures are favourably low compared to R2S profits of £2m as well.

On the balance sheet, the group’s 2013 accounts showed cash of £4.7m, no debt and no pension complications.

However, post-year-end, SeaEnergy paid £4.3m to the vendors of R2S as part of the aforementioned £10m acquisition deal. What with the legacy oil and gas investments looking more like liabilities at present, I reckon a realistic net cash position at present is zero.

Here are three promising quotes about R2S from the 2013 annual report:

1) “In 2014, we also expect to see an increasing range of projects undertaken, as assets previously captured are recaptured…”

At the December presentation, management claimed project ‘recaptures’ on oil rigs could be undertaken just 18 months after the initial photographic survey.

It all supports the notion that R2S enjoys dependable revenues, whereby clients pay to have the initial photographic capture, then pay annual fees to use the associated viewing software, and then pay for any further updated recaptures.

2) “Discussions with clients have also identified the demand for additional services in support of the asset capture/modelling service. We are now working on development of these services, which we expect will add continuing licence and service revenues to the current capture-dominated revenues.”

Sounds good to me.

Notably, it does seem R2S has captured only a small fraction of the number of oil rigs operating at present. An extract from a recent SeaEnergy presentation said the potential for further business was “huge”:

Informal discussions with management at the December presentation indicated 2014 could see R2S grow sales from £4.7m to something perhaps approaching £7m. Certainly this broker forecast noted in a recent SeaEnergy presentation foretells of strong R2S growth this year. 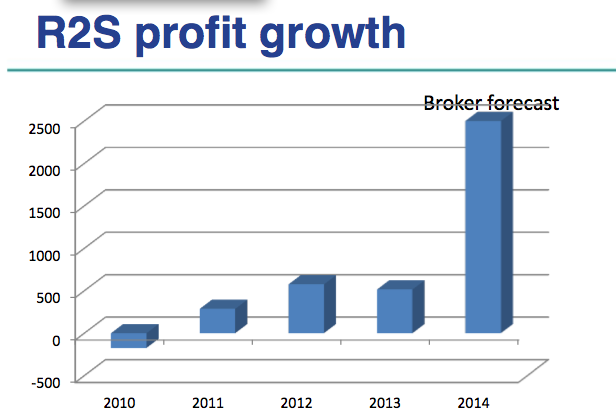 Progress at R2S should, SeaEnergy predicts, help move the whole group into profit this year:

The current 35p share price values the business at £20m, of which £5m is represented by the stake in Lansdowne Oil & Gas.

So that leaves us £15m for R2S, assuming the Consulting and Marine divisions are worth zero.

As mentioned earlier, R2S produced EBITDA of £2.8m during the 12 months to February 2014. Subtract the group’s reported £251,000 depreciation and amortisation cost, and then tax at the standard 20% rate, I get earnings of £2m.

Management could be the most
unpredictable part to this share

Certainly the directors do not boast the illustrious track record and the major shareholdings that can provide reassurance to outside shareholders when events do not go exactly to plan.

In particular, chief executive John Aldersey-Williams has been in charge since only January 2012 and owns ordinary shares with a value of just £37,000. In contrast, his annual basic pay is £200,000.

At least finance director Steven Bertram has served as a main board director since 1991 and boasts shares worth nearly £300,000. Mike Comerford, the firm’s third executive, was appointed to the board just last year and owns no ordinary shares.

One point to note here is the board’s incentive scheme. As far as I can tell, the three executives (and other staff) have committed to pay an aggregate £220,000 in return for any share price gains above 40p on 5.5 million shares (almost 10% of the company).

The incentive scheme was created in 2012 and the directors can claim their awards between 2017 and 2022. Thankfully the 5.5 million shares have already been issued (and held by an employee trust) and will not dilute the group’s share capital.

All told, the skill of the directors has so far been demonstrated only by their spotting the opportunity to buy R2S. But I do wonder why the executives have not backed up that deal with their own share purchases and still maintain relatively small much stakes in the group.

That final earn-out payment was based on achieving the aforementioned and ambitious target of R2S producing EBITDA of £2.8m during 2013/14.

So, there is the chance the R2S managers simply loaded up on contracts to collect their earn-out… and leave little project work left over for 2014 and 2015.

Informal discussions with management suggest this hasn’t been the case, and instead, being part of the wider SeaEnergy has helped R2S sustain its growth progress. But I await upcoming results for confirmation.

The other main risk here is the unproven Consulting and Marine divisions.

If it were not for some R2S operations being transferred to the Consulting division, Consulting would have lost money last year. Meanwhile, the Marine operation remains a loss-maker until it finds sufficient clients.

Just how much cash these two divisions will absorb before they both reach breakeven is difficult to say.

Plus, central costs at group level did look high last year (even if the £311,000 of board restructuring costs are excluded) and may be hiding ongoing costs that may make group profitability harder to achieve. Here are the full divisional profits and losses from 2013: 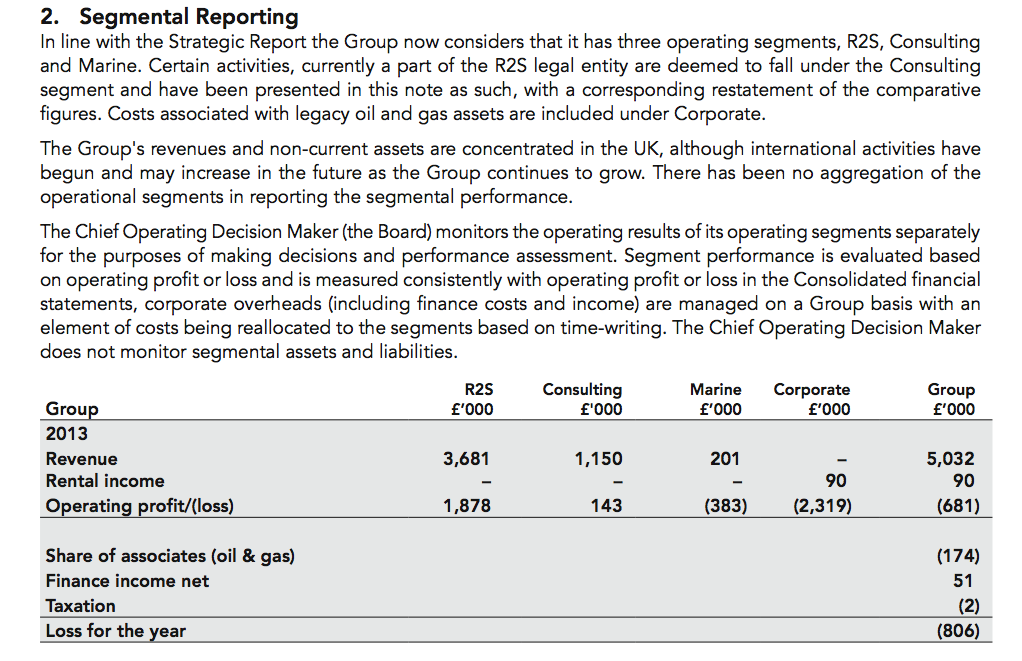 All told, my combined valuation of zero for both Consulting and Marine may be too high.

Yes, SeaEnergy is not my usual type of investment

But digging deeper, I have found what appears to be a super little subsidiary that just may grow into something more substantial. The signs and opportunities for R2S are there I feel.

Sure, my sums may in time look ambitious — especially if the loss-making divisions do not become profitable and/or the valuation of Lansdowne Oil & Gas hits trouble.

But that downside potential is I think more than offset by the upside on offer from R2S. A few more years of superb profit growth there and I doubt the rest of SeaEnergy will matter that much.

1 thought on “SeaEnergy plc: Is This Software Gem Valued At Just 7.5 Times Earnings?”