I love to buy shares run by owner-orientated bosses. You see, they often ensure shareholders are amply rewarded with reliable dividends and are generally the best people to put things right when progress doesn’t exactly run to plan.

That is certainly the case I think at City of London Investment (LON: CLIG), an emerging-market fund manager, where chief executive Barry Olliff remains committed to a healthy payout even though earnings have suffered a setback.

Having started to issue perhaps the most detailed ‘forward earnings guidance’ of any quoted company, Mr Olliff is perhaps the most open, upfront and shareholder-friendly executive I have ever come across.

Although the share price is currently below my average price at 260p, accumulated dividends have delivered a small positive overall return for me.

I am hoping an 8.5% income on my cost price plus an earnings revival can lead to greater total returns from here.

City of London is a ‘boutique’ fund manager specialising in emerging markets. The group established its first fund during 1991 and currently manages around £2b on behalf of mainly American institutional clients.

City of London’s investment approach involves assessing the economic attractions of various developing countries and then, rather than individual equities, hunting for appropriate funds trading at wide discounts.

The group group says it has developed a team-based investment process, which does not rely on ‘star’ fund managers but on “repeatable and sustainable” procedures.

Nonetheless, the managers are not afraid of taking an active approach and have chided a few investment trusts in public to help improve returns.

All in all, the group’s strategy seems like a lower-risk way to approach emerging markets and investing in the fund-management sector generally, which suits me just fine.

City of London joined the market at 180p during 2006 and boasted an impressive financial record until the banking crash.

Without acquisition, funds under management between 2003 and 2008 grew more than ten-fold to £2b, which in turn pumped sales from £3m to £25m and transformed a small loss into profits of almost £11m.

The figures for 2009, however, were not so great. Profits slumped by 42% and the dividend was chopped by 23% as funds under management dived 25%:

The subsequent equity rally helped City of London recover strongly during 2010 and 2011, but the progress reversed during 2012 and 2013 due in part to client withdrawals, unimpressive investment returns and sometimes shaky emerging markets.

In fact, the wider business in terms of profits and client assets under management is now back to where it was during 2007/2008. Extracted from City of London’s website, the chart below details the decline: 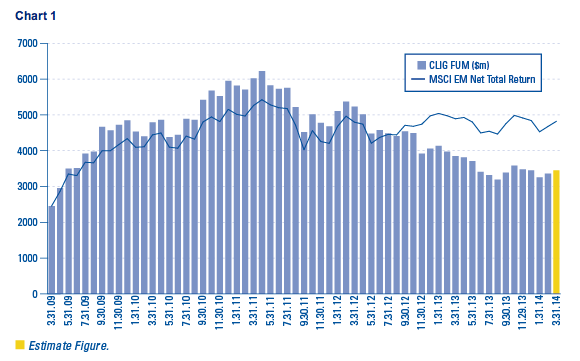 Interim results published in January showed sales down 22% and profits down 28%.

“I am very pleased to report that the expected investment performance of the Emerging Markets Closed End Fund team should place us in the top of the second quartile for calendar 2013. This completes the process of turning around our business and confirms that with good people, technology and also a conservative country allocation process it’s possible to take advantage of pricing anomalies amongst the closed end funds in which we can invest. I am now hopeful that we can build from this base and continue to provide consistent uninterrupted alpha for our clients”.

Furthermore he issued some ‘forward guidance’ that indicated the business was seeking to gain $1bn of further client money by mid-2015. More on that in a second.

City of London’s accounts impress me — here’s why

I love the fact the group has carried net cash and investments since at least 2003 and in that time the sum has advanced from £1m to to £11m (43p per share).

The growing cash pile reflects City of London’s low demands on its cash flow. Working capital movements and capital expenditure are relatively light, which last year allowed the group to pay almost all of its earnings as a dividend:

The only other source of cash expenditure has been the occasional share buyback and regular share purchases for the employee bonus scheme.

True, margins have dropped from their 40% level of 2008, but at 28% within the latest figures the level of profitability remains very healthy.

You may like to know past annual report have cited: “Our offices are by no means the most fancy and when we travel we do not stay in expensive hotels“. I like companies with frugal cultures.

There are no pension complications to worry about either.

Why I believe the 8.5% yield can be maintained

I’m attracted by City of London’s high yield. The company has regularly indicated it can maintain the current 24p per share payout, thus giving an 8.5% income at my 281p average buy price.

Of course, such high incomes often comes with high risks (of the payout being cut) and certainly that could be the case here.

I reckon £1 buying $1.69 and assets under management at $3.4bn, the profit table suggests City of London’s current earnings ought to be about £4.5m or 17p per share. Not enough to cover the 24p per share dividend.

However, profits should improve during the next few years as a legacy marketing agreement runs its course and associated commission payments reduce to zero.

This chart extracted from a recent company presentation outlines the predicted annual costs: 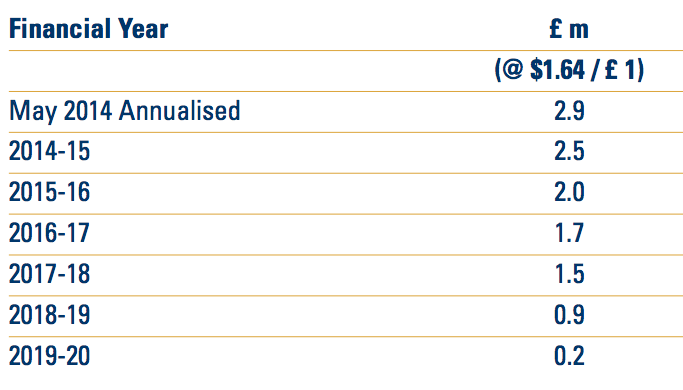 My way of thinking here is that City of London could pay off the expected costs from its existing cash resources, and enjoy a significant, £2.5m near-term boost to profits.

After tax, I feel earnings could therefore be improved to more than £6m or 23-24p per share based on my earlier sums from that helpful profit table.

So the 24p per share could be just about covered.

Meanwhile, discounting all the predicted commission costs back to 2014 at 10% a year gives me a net present liability of £8m.

Subtract that £8m figure from the actual net cash position gives me net cash of £3-4m and a potential enterprise value of the company of about £72m or 267p per share at my 281p buy price.

Then there is Mr Olliff’s forward guidance. He presented this chart in January suggesting what could happen:

Again, just enough to cover the 24p per share dividend.

Of course, this forward guidance is only as good as the assumptions given by City of London. Projections of adding a further $1bn of client money and stock markets gaining 5% and then another 10% may be far too ambitious.

Here are the assumptions in full:

But I get the impression the company would not publish any sort of guidance, even with all the waivers, if the assumptions used were not realistic.

I’m sure Barry Olliff, City of London’s chief exec,
should treat me well as an outside shareholder

Mr Olliff started what became City of London during the Eighties, so he offers the entrepreneurial background and stable leadership that I’m convinced builds superior returns with smaller companies.

Olliff also enjoys a £8m/12% stake and — a good sign for me — his £725k dividend income exceeded his total wage and bonuses last year.

His bonuses, meanwhile, are a straight 5% of group pre-tax profit. That could rankle some investors, as he receives a bonus whether profits go up or down.

But at least it is a clear-cut scheme, everybody knows upfront how the bonus is calculated and there shouldn’t be any surprises when the annual report discloses the figures.

In particular, Mr Olliff has confirmed he intends to remain in charge until 2019 (he’s in his late 60s now) and has in the past forewarned of personal share disposals at specific future prices (from 300p up to 600p!).

I can’t recall another executive ever giving similar advance notice of his future tenure and certainly nothing as clear on personal share dealings. It’s all very refreshing in light of the boardroom shenanigans we’ve all read at many other small-caps.

Another point I like: 1.8 million staff options are covered entirely by shares held in an employee trust, so I am not expecting any major dilution in the near future. A recent presentation showed other directors, staff and the employee trust owning 12% of the business.

There are three ways client money and the income they generate for shareholders could face pressure:

1) A market crash: Substantial market falls will certainly see funds under management shrink as the value of investments decline and clients withdraw their money for ‘safer havens’.

Emerging markets in particular are prone to major swings. As I mentioned earlier, City of London suffered a deep profit drop and had to cut its dividend following the 2008 banking collapse.

This chart from a recent company presentation admits its main Global fund has pretty much tracked its benchmark for the last ten years:

And Mr Olliff admitted within the 2013 annual results:

“Looking back and after analysing previous investment decisions there have been a number of reasons for our underperformance. Examples would include poor investment decisions (poor stock picking), buying securities too early (at too narrow a discount), and not focusing on trading natural discount ranges (by reducing that natural trading range from say 500/600bpts to say 400bpts).”

Though focusing on funds trading at discounts sounds sensible enough, every stock-market strategy underperforms at some point.

And while Mr Olliff has said everything is back on track, were City of London’s stock pickers to lose their touch again, clients could leave en masse and that would not do my investment many favours.

3) Clients just leaving: Clients can simply leave without using a market crash or poor returns as an excuse.

One did just that during late 2012, taking with them assets under management of $0.5bn — which represented more than 10% of total client money at the time.

City of London subsequently claimed the client “took the management of its emerging market exposure in-house, having been a client… for nearly five years.  The decision was based on a change in the client’s strategic objectives.”

Recent annual reports have all stated that any client generating revenue of 10% or more would be disclosed separately. None ever have, so I’m hoping any further client departures won’t be too detrimental to the business.

There is an established boss, the accounts look in good shape and the super yield looks sustainable when considering the legacy marketing costs and the forward guidance.

Sure, there is a dependence on somewhat volatile emerging markets here. But I feel City of London coped relatively well during the banking crash and that gives me confidence for the longer term. The group’s underlying investment process seems sound enough to me, too.

If funds under management and earnings can be improved, I fully expect the shares to substantially outrun the wider market. In the meantime, I am happy collecting the current 8.5% dividend income on my 281p per share investment.

2 thoughts on “City of London Investment Group PLC: How I’m Banking On An 8.5% Dividend Yield”