Today I’m continuing my hunt for Watch List shares with a look at Aveva (AVV).

* Proven and loyal leader: The company has been run by the same boss since the end of 1999

AVV was established in 1967 when it was spun out of Cambridge University as the Computer-Aided Design Centre. Initially a government-funded organisation to develop computer-aided software, CADCentre became a private company in 1983 and floated in 1996.

Renamed Aveva in 2001, the firm today is a leading engineering-software developer for heavy industry. The group’s products are known mostly for the 3D design, construction and management of oil platforms, chemical plants, power stations and cargo ships: 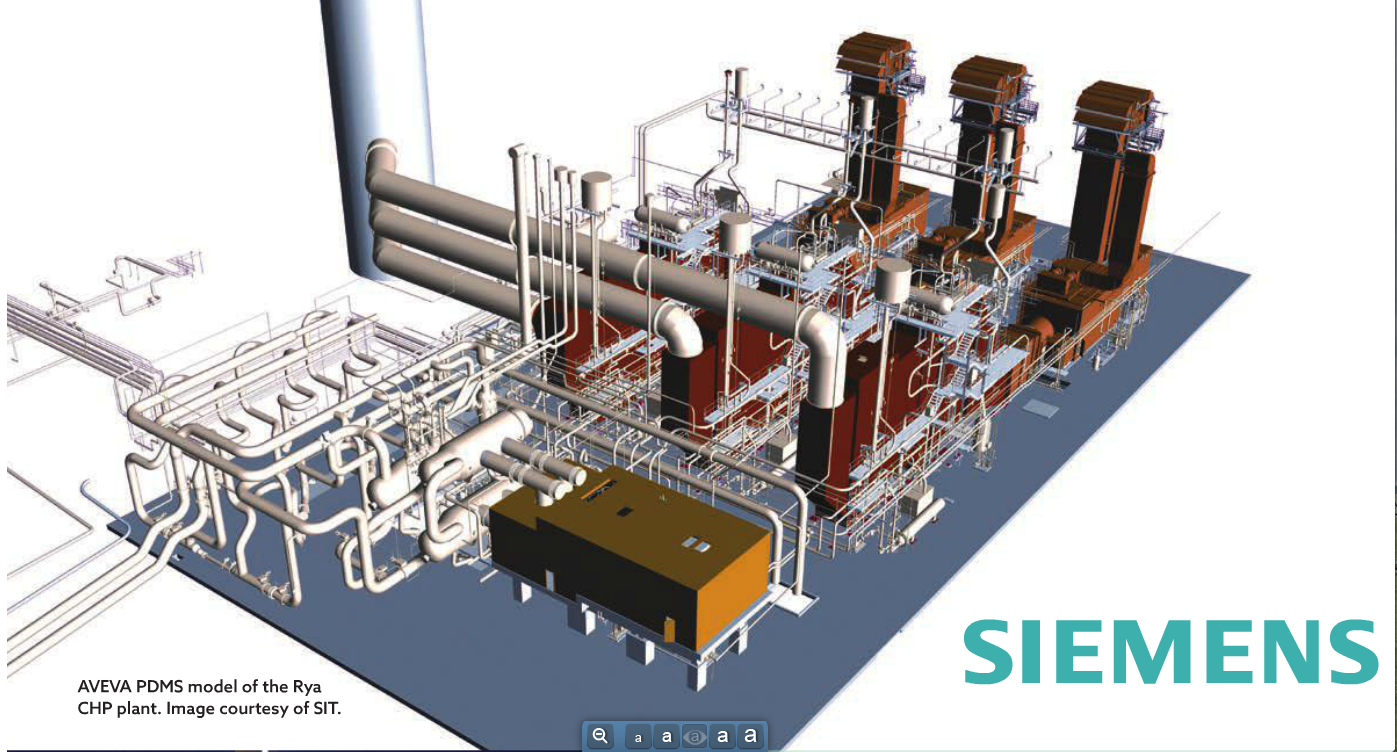 Companies House has annual reports going back to 1995, and show revenue of £17m and operating profit of £2m at the time of flotation. By 2015, revenue had advanced to £209m and had taken operating profit to £56m. Meanwhile, the annual dividend has grown from 0.5p to 30.5p per share since the float.

The expansion rate over time has been very respectable, although there is no denying that profit growth of late has been somewhat pedestrian:

The modest profit advance during the last five years has been due to: i) recent results being hit by the weak oil price and adverse currency movements, and; ii) initial licence fees from clients remaining below their 2009 peak (probably due to the after-effects of the banking crash).

I note AVV’s track record has become a little more unpredictable. The first operating-profit setback occurred in 2002, after which setbacks then occurred in 2010, 2011 and 2015. The table below summarises the scale of the recent downturn:

Still, the annual dividend has made good progress, having never being cut since the flotation. The payout has been maintained just twice, in 2001 and 2002.

One niggle within the financial history is AVV’s liking for exceptional items. Such charges are not huge (a total of £8m versus aggregate operating profit of £299m in the last five years), but they have appeared every year for the last six years now — and will make another appearance during 2016.

These exceptional charges do need to be watched, not least because such costs created a statutory loss in the latest interim results (see below).

Since 2005, AVV has spent almost £80m on acquisitions — an acceptable sum for me given the total operating profit produced during the same time is close to £500m.

Something to bear in mind with acquisitions is AVV’s attempt last summer to purchase the industrial-software assets of Schneider Electric for a net £750m. This potential deal was enormous — the transaction would have doubled the size of the business at a cost equivalent to 19 years of AVV’s 2015 earnings.

AVV first described the transaction as having “a clear and compelling industrial logic and strategic rationale” and would “significantly expand its scale and product portfolio, diversify its end user markets and increase its geographic exposure to the US market”.

But five months later, the deal was called off. AVV admitted:

“During the due diligence process significant integration challenges were identified that could not be overcome without considerable additional risk and cost. This was exacerbated by the highly complex structure of the proposed transaction. As a result, the Board has determined that the anticipated uplift in shareholder value was unlikely to have been realised to the extent previously considered.”

I must confess to having mixed feelings about this episode. Mega-acquisitions (especially ones targeting US firms) tend to end badly for UK companies, and this planned deal does suggest AVV’s directors are very keen to ‘buy growth’.

But to their credit, at least the executives had the courage to backtrack on their original decision after further research.

The latest balance sheet displays share capital of £30m versus earnings retained by the business of £144m. Furthermore, the number of shares issued since 2005 has not been material.

Since its flotation, AVV has operated with a net cash position and the only bank debt reported was £199k in 2003. At the last count, cash was £106m of which £35m was represented by upfront customer payments.

An £8m defined-benefit pension deficit looks manageable to me given the £56m operating profit in 2015.

The last five years have seen total depreciation and amortisation exceed — by some margin — the aggregate expenditure on tangible and intangible assets.

This apparent conservative accounting is due mostly to amortisation charges relating to acquired ‘developed technologies’, for which there is no associated ongoing capital expenditure.

I’m pleased that capitalised development costs in general — as well as the demands on working capital — are relatively low in relation to aggregate profit.

Underlining AVV’s cash generation, the net cash position ballooned from £5m to £190m during the ten years to 2013 — at which point the firm declared a £100m special dividend.

Such sustained super-sized profitability is very appealing, and underlines how attractive the economics of software development can be. In particular, a substantial 70% or so of AVV’s top line comes from recurring service fees — and increases to this type of income often have little associated cost.

I presume AVV’s pioneering heritage in CAD software, plus the long life of the assets that the software looks after, helps ensure clients remain on the books.

I also note that since 2011, some £167m — representing a chunky 16% of cumulative revenue — has been ploughed into R&D to develop new products and perhaps extend the ‘moat’.

Something worth watching, though, are revenue and cost per staff member:

It looks to me as if the firm has taken on a greater number of lower-paid employees, who don’t generate as much revenue and who therefore may not contribute as much to sustaining the group’s industry position.

Richard Longdon joined AVV in 1984. became its chief executive in 1999 and has been in charge ever since. The group’s progress since Mr Longdon’s appointment suggests he is a safe pair of hands.

Mr Longdon is now 60 years old and I would like to think he could remain in charge for a few more years before he thinks about retirement.

During 2015 Mr Longdon received a £445k basic salary — a reasonable sum in my view for leading a business with an underlying operating profit of £56m. Bonuses and share awards do not appear excessive, with only 2014 seeing Mr Longdon’s total remuneration top £1m.

Mr Longdon is not the founder/entrepreneur executive that I prefer to see leading my investments. However, his ordinary shareholding is valued at a not insignificant £3m, while the 2015 annual report shows he has kept staff options to less than 1% of the current share count.

Another positive was Mr Longdon’s decision for AVV to pay that aforementioned £100m special dividend. Handing back surplus cash to investors is often a good sign of a sensible leader.

But as I mentioned earlier, Mr Longdon came close to completing that mega Schneider acquisition last year — and may still wish to bet on another enormous deal.

Possibly not in the short term.

November’s half-year results were not great. On a constant-currency basis, revenue fell 1% and pre-tax profit dived 20% due to a mix of rising costs and lower initial licence fees.

Throw in adverse currency movements alongside exceptional items of £7m — mostly costs associated with the aborted Schneider deal — and the statutory pre-tax loss came to £0.8m. The only number moving in the right direction was the interim dividend, which was lifted 9%.

These paragraphs from the management narrative go some way to explain the lack of progress:

“Sales execution in the period was strong and we continue to focus on diversifying our sales efforts away from Oil & Gas to other industry verticals. We are starting to see the benefit of this with Oil & Gas contributing less than 40% of Group revenue in the first half compared to around 45% a year ago…

Within Oil & Gas, we have seen a difficult environment for our EPC customers who are exposed to offshore projects and a lack of new project awards in the first half has, as expected, resulted in some customers reducing the level of licences under their rental contracts.”

This chart from the accompanying results presentation confirms AVV’s dependence on the oil and gas sector: 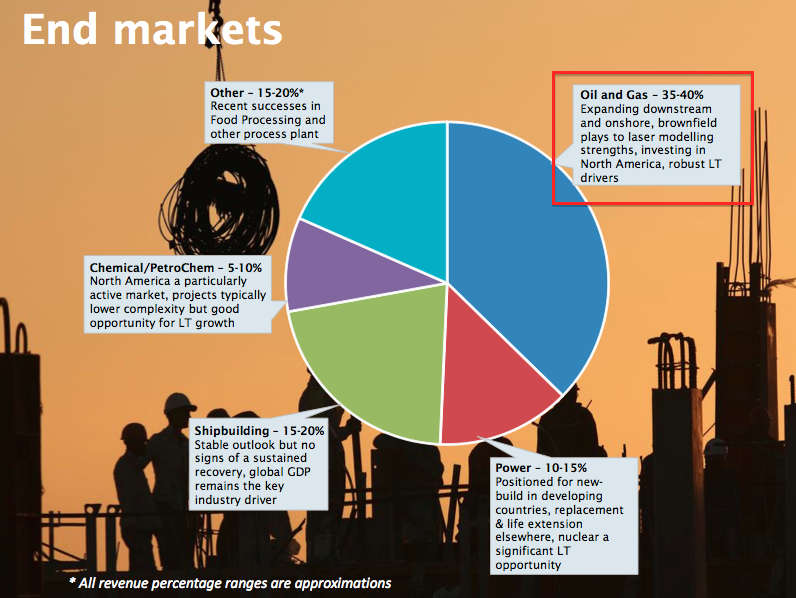 It’s worth noting that 76% of AVV’s first-half revenue came from recurring annual and rental fees. So the business could/should be somewhat resilient to the oil downturn.

Nonetheless, if initial licensing fees continue to dwindle, the hit on reported profit could be significant as the aforementioned attractive economics of software development go into reverse.

Taking AVV’s trailing operating profit of £54m and applying the firm’s expected 24% tax rate, I arrive at possible earnings of £42m or 65p per share.

Then adjusting the current market cap for the £106m cash hoard, £35m upfront customer payments and £8m pension deficit, I come to an enterprise value (EV) of £769m or 1,202p per share.

The potential P/E on my EV and EPS estimates is therefore 18 — which does not strike me as an obvious bargain given the group’s recent financial performance. I suspect AVV’s substantial level of recurring revenue continues to lend support to the valuation.

Is it worth watching Aveva?

Super margins, substantial cash balances, robust returns on equity and a dependable dividend all signal AVV is a quality business — and that the company’s wide range of industrial clients value its 3D software very highly.

Mix in the time-tested chief executive and that significant recurring income, too, and the business looks ideal for any watch list.

That said, the immediate downside for those of us on the sidelines is wondering whether the share price could ever actually drop to a more attractive level. With an £831m market cap, AVV is hardly a ‘market secret’ and a significant profit upset may be required before investors lose faith and the valuation becomes more appealing.

At least there is hope of a setback — AVV is dependent somewhat on the troubled oil sector, while the bold Schneider deal may be an admission by management that the business could struggle as a standalone unit (at least during the near term).

Anyway, I have decided to keep watch on AVV. While I do not expect to ever see the share price in the bargain basement, maybe one day it could become a fairly priced quality opportunity during a prolonged oil-price downturn.

Disclosure: Maynard does not own shares in Aveva.