Summary: Mixed results. The Retail division was subdued, and gave a disappointing second-half performance. However, trading at the Wholesale and Licensing divisions appeared promising. There was further welcome progress on cost cutting, too. This turnaround has still to really turn, and I’ve trimmed my recovery assumptions. But the upside potential remains sizeable. I continue to hold. 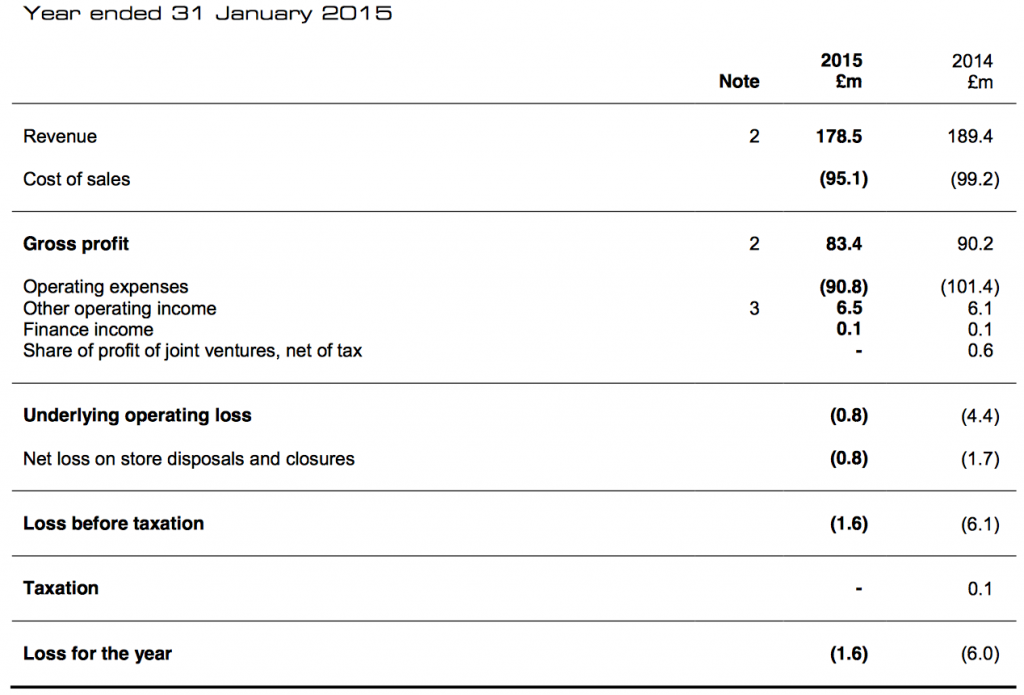 * These results were somewhat mixed.

True, the £0.8m underlying operating loss was not a great surprise.

However, the performance within FCCN’s Retail chain was a little disappointing — especially during H2 — and I do not expect much in the way of sales progress within this division in the near future.

Nevertheless, the group’s Wholesale and Licensing divisions made positive strides during the year and support the notion of the FCCN brand retaining some appeal.

FCCN’s results presentation claimed the average net cash position during the year was £13m. That healthy bank balance, alongside the fact the business is now almost at break-even, continues to provide support for the long-awaited turnaround.

H2 looked a tad worse than H1. During H2, revenue dropped 13% (vs 11% for H1) and gross margins came in at 56.9% (vs 57.5% for H1). The H2 gross margin performance in particular was disappointing, given FCCN had been recording notable improvements on this measure during the prior twelve months.

Nevertheless, the closure of those nine loss-making shops helped the division’s operating expenses reduce to £70.4m for the year. The £34.2m figure for H2 suggests retail operating expenses might drop even further during the current year.

FCCN’s results presentation reveals the average store lease has 4.4 years to run, with “poorer performing stores lower than this average”.  That sounds promising, as does FCCN’s claim that a further 3 or 4 under-performing stores are set to close during the current year.

FCCN says “trading on the high street remains tough”.  Well, I say it depends what you are selling and for how much. Results this Thursday from fellow fashion chain Ted Baker, for example, should make FCCN’s board squirm with embarrassment.

I am not expecting any major store sales improvement at FCCN in the near future.

Wholesale revenue advanced 5% to £75.2m and profits gained 25% to £14.6m — all welcome news. Gross margins were flat, though, at around 32%, but I am pleased Wholesale operating expenses have continued to fall despite revenue increasing.

FCCN is “encouraged by forward orders in our Wholesale business.”

The uplift followed greater sales of FCCN-branded shoes and furniture by third parties.

I am pleased FCCN’s central costs continue to reduce:

* I still believe this share can one day top 100p

Time to revise my valuation sums and FCCN’s recovery potential.

My previous and revised assumptions for what could happen are listed below:

Perhaps the most important estimates are gross margins — I am still relying on some worthwhile improvements. However, FCCN has at times reported such gross margins during the last few years and so I don’t see my assumptions as being outlandish.  Overall, I am betting more on future margin improvements and cost savings than I am on revenue gains.

Anyway, here’s what those new assumptions could produce financially:

The £10.6m profit projection compares to the £11.6m I was projecting back in January.

That looks good upside potential to me with the shares at 54p. As before, the potential returns would be quite respectable if this predicted turnaround can be achieved in less than five years. But as today’s results confirm, the journey is unlikely to be entirely smooth.

* Next update — probably an AGM statement during mid-May.

One thought on “French Connection: I Still Think The Shares Could Top 100p”