Getech (GTC) supplies geophysical reports and data to oil and gas explorers — and I believe the recent oil-price slump is likely to have a significant impact on this small-cap’s near-term progress.

Indeed, even before the oil price started to plunge in the Autumn, GTC had already issued two profit warnings — so the immediate omens here are not great. But for better or worse, I am sticking with the share.

In my view, GTC is a fundamentally attractive business that should have the wherewithal to survive the oil downturn. Plus, this holding could in time become a very lucrative recovery story — assuming profits can one day return to levels witnessed during recent years.

Here’s what’s keeping me in GTC for the long run:

Getech (GTC) was established during 1986 as a research group within the University of Leeds to compile and analyse data for oil and gas companies.

Initial studies involved mapping the Earth’s magnetic field and gravitational pull, and almost 30 years later, the group has since compiled what it claims to be the world’s most extensive commercial library of geophysical information.

I am not an expert geoscientist, but from what I can understand, small variations within the Earth’s magnetic field and gravitational pull can apparently highlight differing geological structures and varying rock densities.

This information can then help exploration companies evaluate the likelihood of finding oil and gas within a particular area before a more expensive seismic study is performed.

During 2000, the research group was spun out of the University of Leeds as a private company called Geophysical Exploration Technology Ltd. In recent years, the firm has complemented its magnetic and gravity studies by amassing a whole range of paleogeographic documentation, climatic and tidal models, tectonic plate analysis and public seismic reports to create a vast 3D exploration database.

During 2005, the renamed Getech joined AIM and 2011 saw the launch of its flagship Globe product — where clients can sign multi-year contracts to gain full access to GTC’s database and documentation. In addition, GTC sells its data on a regional basis and can also supply bespoke reports and commissions.

Clients include BP, BG, Royal Dutch Shell, ExxonMobil and Chevron, who all (according to GTC) find it quicker and cheaper to use GTC than create their own specialist service in house.

This presentation by GTC’s chairman at the Oil Barrel conference during November 2014 explains the business in more detail and is well worth 23 minutes of your time. Plus there are informative catalogues on GTC’s website, in which you can view Globe images such as this: 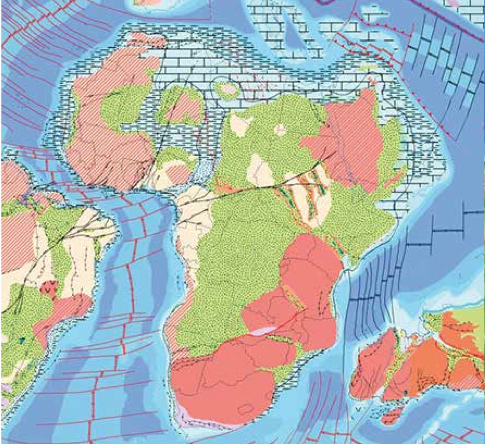 (Apparently, that is the Turonian palaeogeography for Africa and shows the gross deposited environments and tectonophysiographic terranes.)

Progress as a quoted company has not been entirely smooth

Operating profits bobbed around £0.7m between 2005 and 2008, and then turned to losses during 2009 and 2010. The table below shows the subsequent recovery, with the rebound exceeding expectations during 2012 and 2013:

Sadly for me, I failed to act after wondering whether the recovery was about to stall — and profits did indeed come in substantially below expectations for 2014.

Below are GTC’s explanations for the losses reported during 2009 and 2010 (my bold):

“The historically high oil and gas prices (outside the US) have resulted in what we perceive to be a continued recovery, particularly for exploration and production companies. We also believe this is likely to lead to increased spending from companies in exploration and hence on the services we offer.”

“Continued high oil prices have led to companies expanding their international exploration efforts, and hence to the increased requirements for our products.”

“We believe that the relative stability of the oil price at historically high levels will continue to provide a sound market environment for exploration giving a very positive outlook for our business.”

Moving to 2014, and the last annual results owned up to this (my bold):

“Two interlinked factors will impact on Getech’s business in the current year and for the near future. There appears to be increasing concern about the growth prospects for the global economy, largely due to concerns about China. This is already having an impact on oil prices, which have softened significantly in the last few months. Given the pullback in exploration spending in 2014, we believe expenditure will not reach the previous high points of 2012 in the near future.”

But it’s not all doom and gloom.

In particular, GTC revealed its largest-ever contract in September (a $5m deal with the Angolan state oil operator) and November’s annual statement claimed the group had a “strong foundation for growing the business in the short to medium term”.

However, those comments were issued in November — when the oil price was about $78. Since then oil has lost 40% to $47, which leaves me doubtful as to whether GTC’s optimism will be maintained during 2015.

I like the conservative accounting and impressive cash flow

I’m holding onto GTC because the accounts indicate it’s a decent business with the resources to survive the sector downturn (and hopefully prosper thereafter).

Importantly for me, the balance sheet shows cash of £3.4m, no debt and no pension liabilities. A bonus is freehold property (the Leeds head office) with a book value of £2.5m.

Margins underscore the notion GTC has a respectable competitive position. During 2012, 2013 and 2014, which coincided with the initial three-year phase of Globe, operating margins averaged an impressive 20%. In fact, margins based on aggregate sales, profits and losses recorded during the last ten years are a healthy 15%.

I’m particularly impressed by GTC’s cash flow and how cash capital expenditure has been completely covered by the depreciation and amortisation charged to headline earnings.

Meanwhile, working-capital movements appear sound — with the large outflow reported for 2014 due (I believe) to a flurry of sales booked just before the year-end where the associated invoices had still to be paid.

An academic board with three Doctors and a Professor

I must admit GTC’s directors are not the obviously talented and shareholder-dedicated executives that I prefer to have running my shares. But as paid professionals go, there is more than enough in the boardroom to justify my backing.

For a start, I’m encouraged by the loyalty of chief executive Raymond Wolfson.

Mr Wolfson was a GTC non-executive years before the flotation, became chief exec in November 2007 and took full charge in October 2009 when GTC’s founder stepped down. Given the timing of his appointments, I can’t really blame him for GTC’s losses in 2009 and 2010 and I can’t fault him either for GTC’s performance thereafter.

Among the other executives, technical director Dr Paul Markwick has worked at GTC since at least the flotation while sales director Professor Paul Carey joined the firm in 2011.

Adding some clout to proceedings is the non-exec chairman, who is an ex-chief exec of Dana Petroleum, the former FTSE 250 business. Elsewhere on the board, I see the finance director has been a non-executive for more than ten years and his accountancy practice helps compile the annual figures.

I’m pleased there is a ‘thin cat’ feel to this management team. Director pay appears quite modest, benefits have been minimal and, despite the bumper profits of 2012 and 2013, no bonuses have been disclosed.

That said, GTC has been somewhat liberal with options. Potential dilution from past grants now runs at 9%, although the chairman alone has options representing 3% of the share base. The option count has been creeping higher over the years and is something I will have to monitor.

Ordinary executive shareholdings are sadly minimal, but two former directors (including GTC’s founder) and a current non-exec do retain a combined 24%/£2.5m investment.

I was prompted by this upbeat trading statement, which disclosed

(At the time, the oil price was still reasonably high at around $93.)

This three-year period covered the first three-year phase of the Globe project, so I reckoned the shares were undervalued if earnings for 2015, 2016 and 2017 could repeat the tax-credit-enhanced figures for 2012, 2013 and 2014.

Back to today, those earlier assumptions now give a P/E of just 5 with the recent £6.6m enterprise value at 33p. The trailing 2.2p per share dividend supports a 6%-plus yield.

But for what it is worth, I have (very roughly) calculated announced contracts for 2015 could produce sales of £4.4m, which will not leave room for any profit after applying last year’s 68% gross margin and £3.5m overhead.

Still, there’s always that balance sheet to consider. At the last count, net tangible assets were £7.3m or 24p per share, of which net cash was 11p and that freehold was 8p. So at 33p we are not a million miles from book value.

But we have been closer. During 2010, buying at the 12p low compared to a then book value of 10p per share. However, GTC was then recording losses and net cash amounted to just £7,000.

Yes, the near-term omens do not look great right now

As I mentioned earlier, the direction of the oil price can influence GTC’s progress significantly.

Referring back to how GTC reported the difficult times of 2008 and 2009, the near-term omens do not look great right now. Six years ago, losses were racked up as the oil price dived below $40 and it took a rebound to $70 before GTC sounded a note of confidence.

Furthermore, GTC’s clients cut their annual budgets at the start of 2009 and, despite the oil price recovering later that year, did not increase their spending until 2010. I worry that client expenditure will once again take some time to recover after any oil-price rebound.

On the subject of clients, GTC is generally dependent on chunky contracts and during 2011, 2012 and 2014, the group’s two largest customers represented at least 23% of total sales. Not great when such customers might want to defer spending quite soon.

Plus, I note Globe clients have dropped from ten to five after the initial three-year phase ended last year. I also see deferred income (upfront customer payments) has dropped from £2m to £1m, suggesting less interest for GTC’s products.

Another potential downside is management’s desire to expand by acquisition. Chief exec Mr Wolfson wrote this within November’s annual results (albeit when oil was $78) (my bold):

“Finally, our strong knowledge base and financial robustness allow us to look at new opportunities. We are in the process of developing new business streams, which build on our key strengths and which we hope will be major revenue generators in the medium term. We are also actively looking at acquisition opportunities, which will extend and grow our core areas of expertise.”

I just wonder if the hatches ought to be battened instead.

This has not been my greatest investment. I have been caught out badly by the oil-price slump and, given GTC’s history, I cannot see the firm escaping the latest industry downturn.

Still, GTC was quite confident of improved profits in November and — despite all my pessimism — a profit warning for 2015 has yet to be issued. (The current half-year ends this month and I suspect the next trading update will appear in February.)

Meanwhile, GTC’s board and accounting appear quite conservative and I’d like to think the difficulties experienced during 2008 and 2009 can help this small-cap navigate the current troubles successfully.

If profits can ever return to levels seen during the last few years, then my P/E of 5 at 33p would look an absolute bargain. However, I am not tempted to buy more shares right now, simply because GTC already represents 5% of my portfolio and I would like further clarity on progress from April’s interims first.

The great dilemma I could face is that, before the next announcement, the share price drops further towards the 24p book value. You see, the last time it came very close to book value, the shares went on to rally eight-fold in four years!