I was quite satisfied with today’s update from City of London Investment (CLIG), my largest holding.

The emerging-market fund manager confirmed its assets under management (AUM) had improved from $3.9bn to $4.0bn during the six months to December 2014, a period when the group’s emerging-market benchmark index dropped 8%.

I’m reassured all my sums continue to point to a maintained 24p per share dividend and a bumper 7%-plus yield at 325p.

This is how all companies should update investors

Back in May I applauded CLIG for its decision to issue “perhaps the most detailed ‘forward earnings guidance’ of any quoted company.”

I mean, just how many companies do you know are confident enough to publish this level of insight? 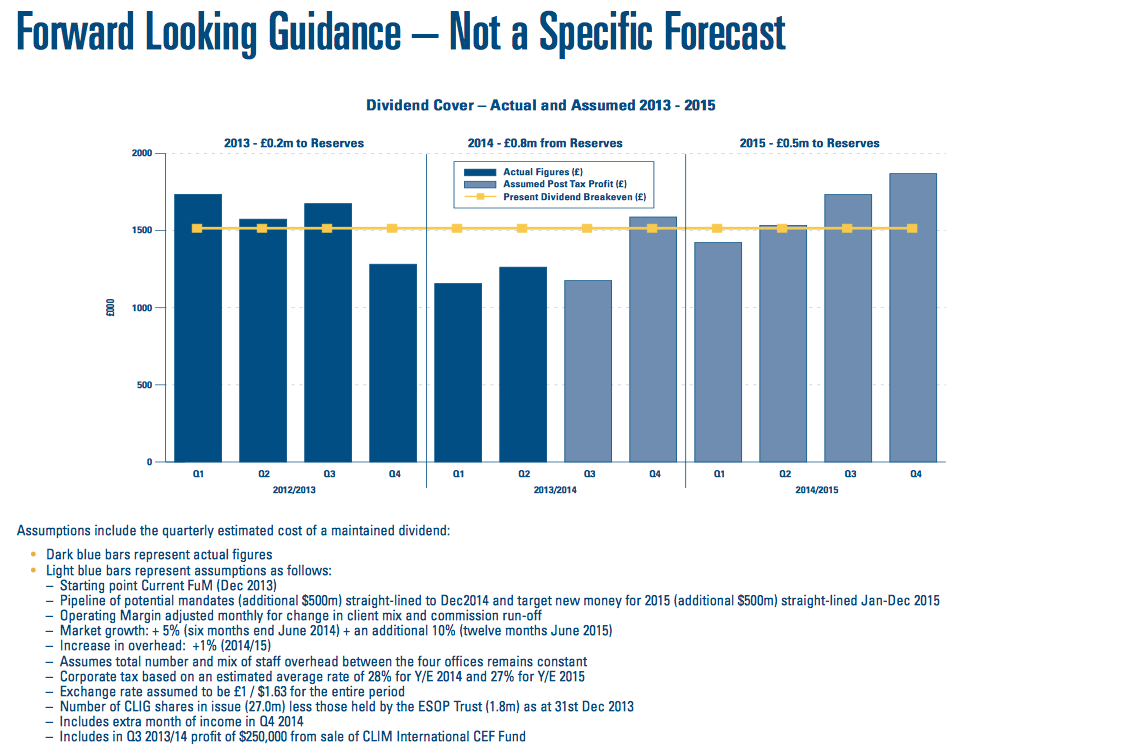 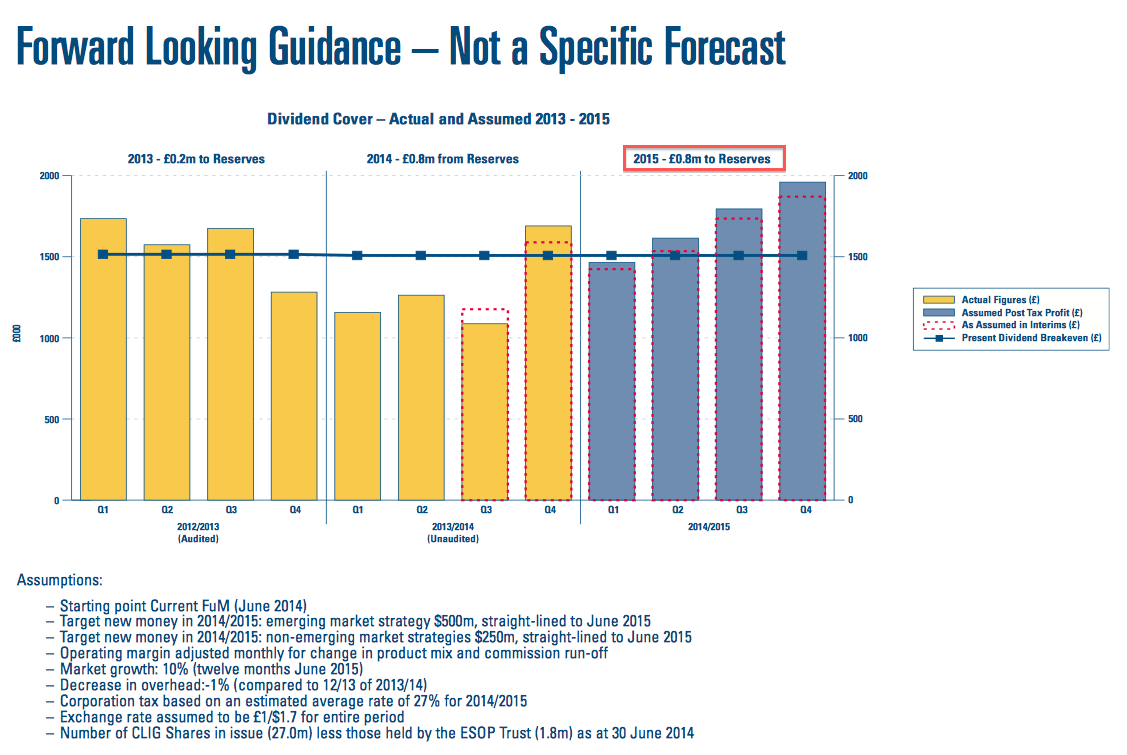 In fact, the above July 2014 guidance essentially carried a profit upgrade.

You can see for 2015, in that red box above, that the projected ‘transfer to reserves’ — profits retained after paying the dividend — had improved from the earlier £0.5m to £0.8m.

Falling markets have since cut the guidance

However, the forward earnings guidance issued today has effectively trimmed that £7.2m projection to £7.0m or 26p per share. You see, the ‘transfer to reserves’ for 2015 has now been cut from £0.8m to £0.6m (as per the red box below). 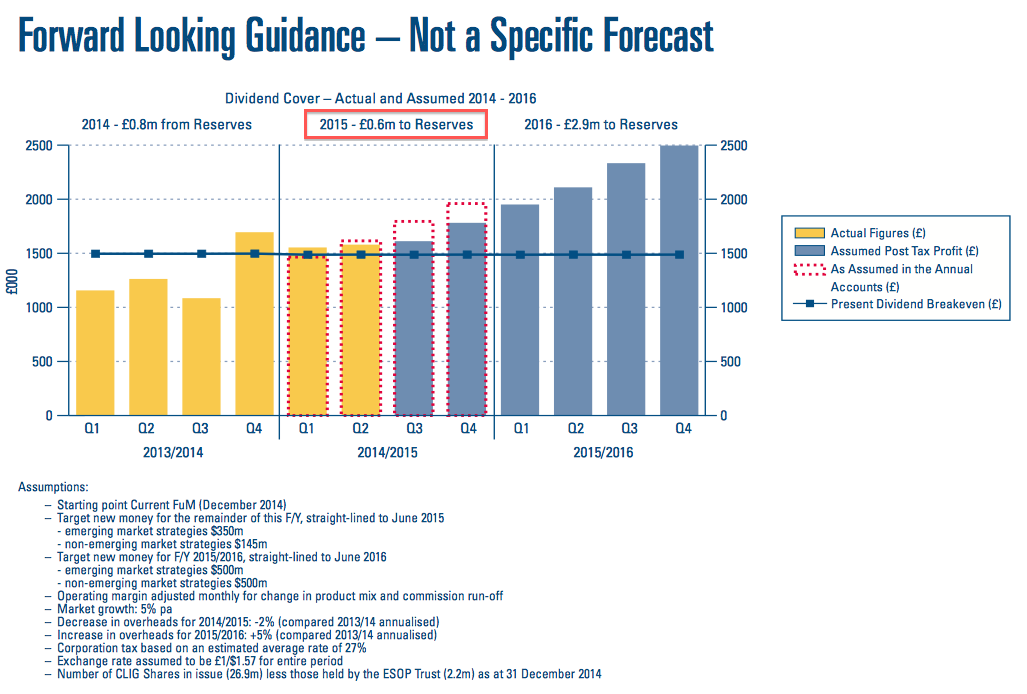 The next chart explains why a trim was needed. CLIG had been predicting AUM at the end of December 2014 was going to be $4.5bn — some $0.5bn ahead of the actual figure announced today. 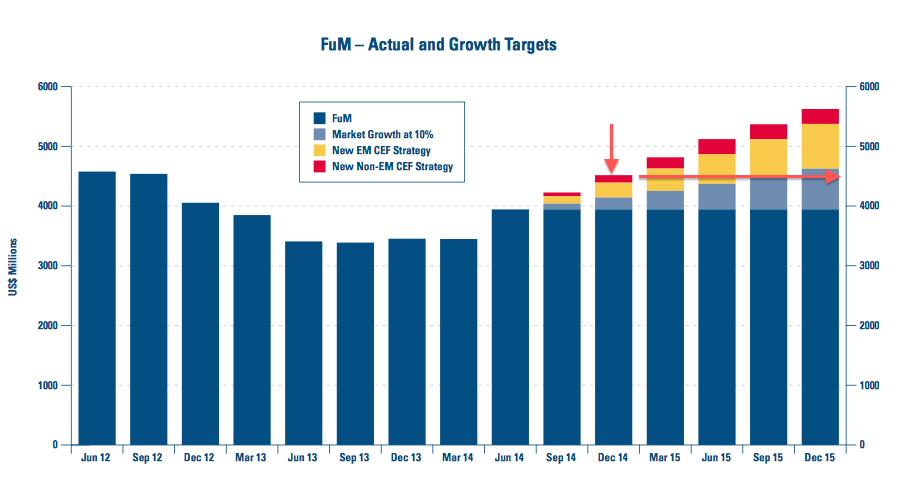 There were two reasons for this shortfall and today’s profit-guidance trim:

Thankfully my investment decisions have always been based on CLIG’s reported AUM levels and not its projected ones. As such, I am not too disappointed by the revised guidance.

That said, it is very hard to ignore the new projection for 2016… 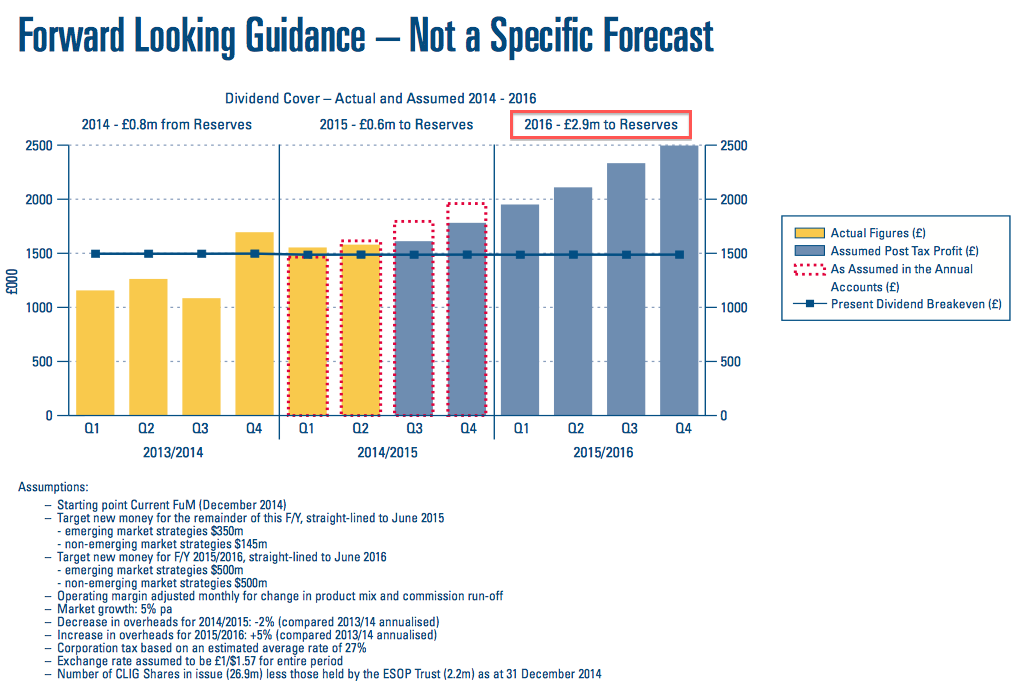 It’s ambitious stuff, and is based on emerging markets growing 5% a year and extra client money of $1.45bn taking total AUM to almost $5.5bn. Your guess is as good as mine as to whether CLIG’s targets are achievable, but I’d like to think the managers here would never publish guidance that was totally out of reach.

Meanwhile, today’s statement also claimed pre-tax profits for the six months to December 2014 could be £4.3m. Doubled up to £8.6m and taxed at CLIG’s indicated 27%, earnings could be 23p per share.

And referring back to the helpful profit table in the 2014 annual report: 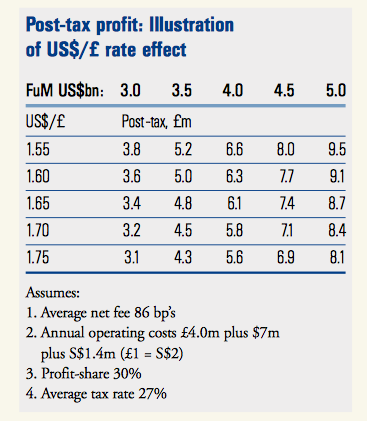 All the above calculations suggest to me CLIG’s dividend can be sustained at 24p per share — and deliver that 7%-plus yield — given the group’s declared “flexibility” when it comes to dividend cover.

Depending on the earnings prediction chosen, I make the P/E at 325p to be something like 11-12 adjusted for the group’s £10m/38p per share cash hoard.

It really is a pleasure to read CLIG’s statements

That’s because all the facts and figures are there and it is really quite simple to construct various profit outcomes.

Of course, whether those outcomes actually come good can be dependent on market fluctuations — which have partly prompted CLIG to revise down its current-year expectations today. I am aware further market ructions could hurt this business.

But for now, management’s open and straightforward attitude towards shareholders, the group’s reasonable progress of late, the attractive accounts and that generous dividend continue to make CLIG a firm favourite for me.